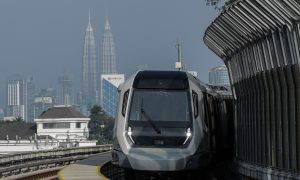 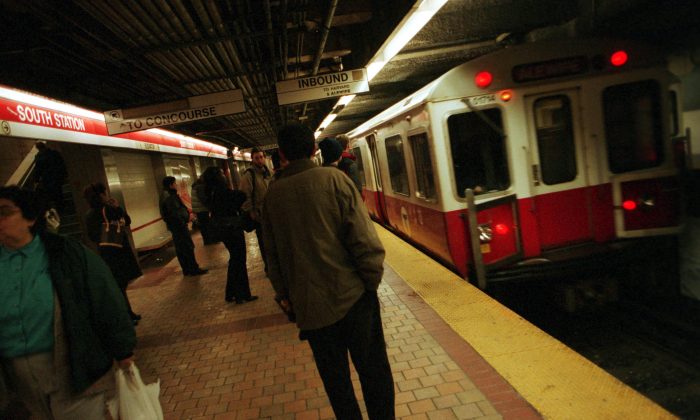 A Red Line train rolls into South Station in downtown Boston MA, U.S. on March 13, 2001. Boston's subway system is the oldest in the nation. (Darren McCollester/Newsmakers)
US News

During a July 26 hearing, the Massachusetts Joint Committee on State Administration and Regulatory Oversight heard testimonies about Bill H.2691, which would prohibit certain business dealings with agents of “non-market economy countries” by the Commonwealth and the Massachusetts Bay Transportation Authority (MBTA).

The bill, presented by Republican representative Shawn Dooley, proposes that “the secretary of transportation shall not approve any contract or subcontract with any vendor or entity that is incorporated in or has manufacturing facilities in the United States and receives support from the government of a country that is identified as a non-market economy country.” The law applies to any mass transportation facility and equipment contract of more than $1 million.

Both Dooley and Erik Olson, Vice President of the Rail Security Alliance, testified in favor of the bill before the joint committee on Friday afternoon.

“China has been actively hacking our government, our corporations and citizens at an alarming rate,” Dooley said. He expressed concern that if Chinese state-owned rail companies continued working with the MBTA, it would give the Chinese regime control of the U.S. transportation system in the long term.

“A core value of western democratic countries is that competitions must be fair and everyone must play by the rules. The question we must ask is: ‘Is China playing by the rules?’” Dooley said.

He said that companies from China can always provide a lower bid because they are subsidized by the government. He mentioned that 10 years ago, a Chinese state-owned rail company entered Australia and outbid other competitors by 10 to 15 percent. Their low price forced most domestic rail manufacturers to go out of business within a few years.

“Once it happened, the Chinese government closed its local Australian shop, shipped everything back to mainland China. And for any rail or infrastructure program that needs to be provided by former Australian companies, now you have to find them in China,” Dooley said.

He also said that Massachusetts should not only consider the costs, but also think about China’s record of human rights violations, including its oppression of different groups and providing unsafe working conditions for workers.

A CRRC MA statement to the joint committee claims that transit rail cars purchased from China don’t pose any threat to the United States: “CRRC MA adheres to the rigorous cybersecurity practices outlined within a cybersecurity analysis based on a U.S. Department of Defense military system safety standard.” It also says that the whole process of building the cars, including software development, manufacturing and testing, is reviewed by agency and third-party consultants.

In an interview with The Epoch Times, Dooley said he worried that a company controlled by the Chinese regime, like CRRC, may hide listening devices in the trains or create backdoors in the system, so as to control security cameras or other gears for surveillance or even destruction purposes. “We can now flip a button, turn on some controls, shut down all the trains, or speed up all the trains and have it create a mass casualty incident,” Dooley said.

On Oct. 20, 2018, Dooley published an op-ed in the Commonwealth Magazine, saying that CRRC gets money directly from the Chinese regime, which has a well-known history of hacking foreign companies and stealing U.S. intellectual property. Earlier that month, Bloomberg reported that Chinese spies used a tiny chip to hack some of the largest companies, like Amazon and Apple.

The potential threat of trains made by CRRC has gained national attention after the state-owned company won contracts for new subway cars in Los Angeles, Chicago, Boston and Philadelphia.

In May, U.S. Senate Democratic leader Chuck Schumer asked the federal government to investigate if a plan for new subway cars in New York City, designed by a Chinese state-owned firm, could pose a threat to national security.

On June 27, the U.S. Senate passed a $750 billion defense policy bill with an amendment to bar federal funds from going to Chinese state-owned companies such as CRRC, the world’s largest maker of passenger trains.

On July 12, the U.S. House of Representatives passed its version of the defense-policy bill which also bans local transit agencies from using federal money to buy railcars from companies owned, controlled or subsidized by the Chinese regime.

CRRC spokeswoman Lydia Rivera told the Wall Street Journal that if the bill becomes law, it will cost jobs in America. But in Massachusetts, Dooley disputed CRRC’s defense and questioned the Chinese company’s employment numbers.

According to correspondences between Dooley and the MBTA obtained by The Epoch Times, the House Representative requested the agency to “clarify that of the 213 jobs (created by CRRC in Springfield), how many are held by Chinese nationals working in the United States versus residents of the Commonwealth or the United States versus all other employees who are not residents of the Commonwealth.”

The MBTA responded that CRRC MA proposed to hire 150 local employees, but is not required to, and has not shared the citizenship of its workforce or whether those employees reside in Massachusetts. A Boston Globe editorial on May 21 claimed that CRRC employs 102 workers.

As the new Orange Line car shell was manufactured in China and was only assembled in Springfield with systems and components mostly provided by U.S. vendors, Dooley also doubts if the Chinese company is able to manufacture quality cars.

So far, rollout of new Orange Line cars has been delayed twice. Dooley said MBTA sources told him that the delays were partly caused by problematic production. “I was told that one of the trains actually didn’t measure correctly, so it wouldn’t fit in certain things. And some of the communication links aren’t speaking with the current communication links that we have,” Dooley said.

In March, MBTA’s Deputy General Manager Jeff Gonneville said the delays were due to a software issue that was identified during early independent testing.

He said he is optimistic about the bill being passed by the House. “I think prior to the national attention, the chance would have been very, very small. But now I think it’s actually pretty good. It’s hard for the Commonwealth to ignore the facts,” Dooley said.