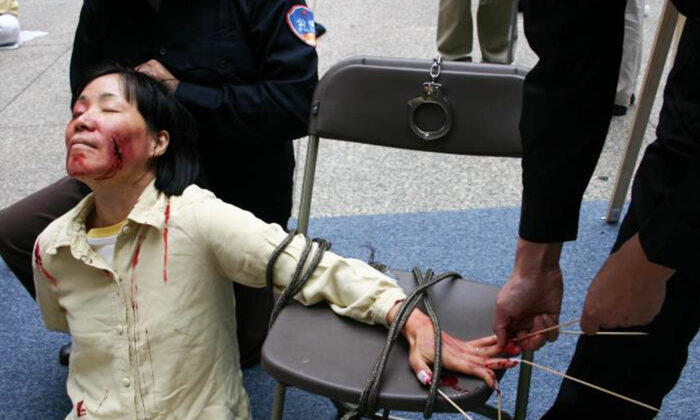 Reenactment of one of the torture methods employed by Chinese officials to coerce Falun Gong practitioners to renounce their faith. (Courtesy of Minghui.org)
China Human Rights

Regardless of their ages, the CCP is persecuting spiritual believers of all faiths under the disguise of 're-educating' them.
By Jocelyn Neo

Since the Chinese Communist Party (CCP) came to power in 1949, it has continued suppressing citizens and spiritual groups to maintain power. Recently, reports have confirmed that the communist regime is using sexual abuse as a tool for re-educating and transforming prisoners of faith, regardless of their age.

The CCP has been persecuting Uyghur Muslims, Christians, Buddhists, and Falun Gong practitioners for years, to coerce them to renounce their faith. Those who refuse to comply are detained in “re-education camps” where they are subjected to unimaginable abuses, including gang rape and electrocution.

[R]ape has become a culture. It is gang rape and the Chinese police not only rape them but also electrocute them. They are subject to horrific torture.
— Anonymous policewoman from a camp in Xinjiang, China

To condemn the CCP’s grave human rights violations, the Trump-era administration said on Jan. 19, 2021, that the communist regime has committed “genocide” and “crimes against humanity” in its repression of the Uyghurs Muslims.

The then-U.S. Secretary of State Mike Pompeo said in a statement that the CCP has incarcerated over a million Uyghurs, subjecting them to forced labor, forced sterilizations, and torture.

“After careful examination of the available facts, I have determined that the PRC [People’s Republic of China], under the direction and control of the CCP, has committed genocide against the predominantly Muslim Uyghurs and other ethnic and religious minority groups in Xinjiang,” Pompeo said. He added, “I believe this genocide is ongoing, and that we are witnessing the systematic attempt to destroy Uyghurs by the Chinese party-state.”

Two weeks later, the BBC published a detailed report on the systematic sexual torture happening in Xinjiang’s tightly-guarded re-education network. The report that is based on first-hand interviews of several Uyghurs who were previously detained in the internment camps revealed the torture and gang-rape horrors they witnessed or lived through.

Tursunay Ziawudun, 42, who fled to the United States after escaping from Xinjiang following her release, recounted to the BBC the sexual abuses she underwent and witnessed while detained for nine months in China’s secretive camps in Xinjiang.

Ziawudun, who is married to a Kazakh and had returned to Xinjiang for work in 2016 after staying in Kazakhstan for five years, detailed how she was shocked with an electric baton and “gang-raped on three occasions,” the BBC reported.

“The woman took me to the room next to where the other girl had been taken in,” Ziawudun told the BBC. “They had an electric stick, I didn’t know what it was, and it was pushed inside my genital tract, torturing me with an electric shock.”

“They don’t only rape but also bite all over your body, you don’t know if they are human or animal,” she said. “They didn’t spare any part of the body, they bit everywhere leaving horrible marks. It was disgusting to look at … And it is not just one person who torments you, not just one predator. Each time they were two or three men.”

Talking to Fox News, Ziawudun said: “Any woman under 40 was raped. Every one in the camp experienced this … I was also beaten—I was kicked and stamped on—once so much on my private parts that I was bleeding, and I since had to have my ovaries removed.”

The BBC report said that even the elderly women detainees were not spared. Ziawudun recalled seeing an elderly Uyghur woman being humiliated.

“They stripped everything off the elderly lady, leaving her with just her underwear. She was so embarrassed that she tried to cover herself with her arms,” Ziawudun told BBC. “I cried so much watching the way they treated her. Her tears fell like rain.”

Ziawuden’s claims were backed by Qelbinur Sedik, an Uzbek woman from Xinjiang who was coerced to teach the Chinese language to the internment-camp detainees. Sedik told the BBC that a camp policewoman confirmed, after Sedik once secretly asked her, that sexual abuse is indeed happening in the camps.

“Yes, the rape has become a culture. It is gang rape and the Chinese police not only rape them but also electrocute them. They are subject to horrific torture,” Sedik recalled the policewoman’s words.

Gulzira Auelkhan, another Kazakh woman from Xinjiang who was forced to help the camp guards by stripping women, also confirmed to the BBC that gang rape is common in the camps.

“They forced me to take off those women’s clothes and to restrain their hands and leave the room,” Auelkhan said. “You can’t tell anyone what happened … It is designed to destroy everyone’s spirit.”

In the recent past, several previously detained Uyghurs had also described similar harrowing tales of torture and rape from the Xinjiang camps.

Gulbakhar Jalilova, a Uyghur and Kazakhstan national who was detained in 2017 for 15 months in an all-female camp, told The Epoch Times that rape happened on a daily basis in the camps. “Young girls are taken out and raped all night long. If you keep resisting, they will inject you with something and kill you,” Jalilova said.

In 2019, Sayragul Sauytbay of Kazakh descent, who was forced to teach the Chinese language in the camp, told Haaretz, an Israeli newspaper, that she once witnessed a female detainee being raped by policemen, “one after the other,” in front of 200 inmates. The incident left Sauytbay traumatized.

“While they were raping her they checked to see how we were reacting,” Sauytbay told Haaretz. “People who turned their head or closed their eyes, and those who looked angry or shocked, were taken away and we never saw them again. It was awful.

“I will never forget the feeling of helplessness, of not being able to help her. After that happened, it was hard for me to sleep at night.”

Sexual Abuse of Other Spiritual Believers

Female adherents of Falun Gong are routinely subjected to sexual abuse and rape for not renouncing their faith. Falun Gong (or Falun Dafa) is a spiritual meditation discipline based on the principles of truthfulness, compassion, tolerance; it is freely practiced by over 100 million people worldwide but is being violently persecuted in China, and has been since July 1999.

Detailing the torture and routine sexual abuse faced by Falun Gong practitioners, a two-part report has been compiled by Minghui.org, a U.S.-based website dedicated to documenting the persecution of Falun Gong.

At the notorious Masanjia Forced Labor Camp in Shenyang, Liaoning Province, 18 female practitioners were thrown into the men’s cells and the guards encouraged the inmates to rape the spiritual adherents, according to the report. The elderly or young, no one was exempted from these abuses.

In 2001, Zou Jin, 70, of Changsha City, Hunan Province, was gang-raped at the Changsha City First Detention Center and sentenced to nine years before she passed away. A 9-year-old girl, who was the orphan child of a Falun Gong practitioner, was gang-raped at the Changping Mental Hospital in Beijing in 2002. “Her screams and cries were heart-wrenching,” Minghui.org reported.

The report said the authorities also forced pregnant practitioners to abort their unborn babies, beating and shocking them with electric batons which eventually lead to miscarriage.

The CCP hasn’t shown any leniency in abusing Buddhist nuns or Christians either.

The Tibetan Center for Human Rights and Democracy has reported on the personal account of an anonymous Tibetan monk who was detained for four months in a re-education center, in Sog County, Tibet Autonomous Region, in 2017. The monk recounted seeing nuns being sexually abused after participating in military drills.

“Many nuns would lose consciousness during the [military] drills,” the monk wrote. “Sometimes officers would take unconscious nuns inside where I saw them … grope all over their body.”

“Who knows what else they did to the nuns?” the monk wrote.

Citing the sexual abuse account of a Chinese Christian, the editor-in-chief of the Bitter Winter magazine, Massimo Introvigne, wrote that Jiang Guizhi, a member of The Church of Almighty God in China, was raped by policemen and later died after the severe torture.

In 2019, the Association for the Defense of Human Rights and Religious Freedom (ADHRRF) reported a more detailed account of the torture experienced by Jiang. After being repeatedly asked by a cellmate, Jiang revealed that “the police had taken her to a private room in a hotel where she was interrogated, raped, and had objects stuffed inside her vagina,” the ADHRRF reported.