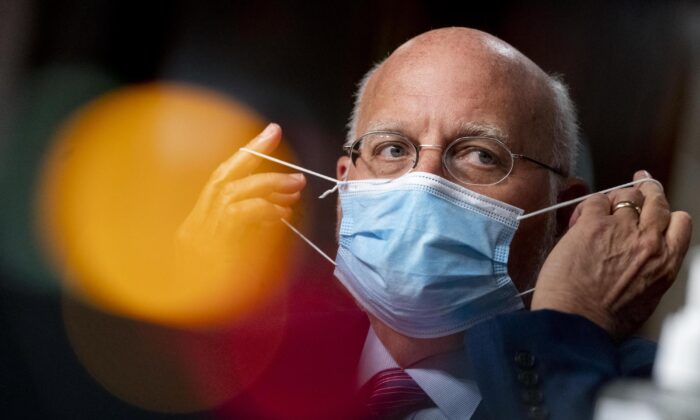 The director of the Centers for Disease Control and Prevention (CDC) urged Americans at a Senate hearing on Sept. 16 not to dismiss the efficacy of wearing facial coverings amid the CCP virus outbreak, saying that face masks are “more guaranteed” to offer protection from the virus than a vaccine.

Speaking at a hearing of the Senate Appropriations subcommittee, Dr. Robert Redfield responded to questions about the administration’s response to the pandemic, including on the subjects of testing, vaccine development, and case counts. He also stressed the importance of mask-wearing.

“I might even go so far as to say that this face mask is more guaranteed to protect me against COVID than when I take a COVID vaccine,” he said.

Redfield said this is because the vaccine might not work for everyone, noting 70 percent efficacy as an example.

“And if I don’t get an immune response, the vaccine is not going to protect me. This face mask will,” he said.

A study published in July in the American Journal of Preventative Medicine found that, based on simulation experiments, in order to extinguish the ongoing CCP virus epidemic, a vaccine would have to have at least a 60 percent efficacy rate, assuming coverage of 100 percent. If coverage were 75 percent, the vaccine efficacy threshold would have to be 70 percent.

While some experts have said life can’t return to normal without a COVID-19 vaccine, others are skeptical whether efforts to fast-track a vaccine will bear fruit. So far, scientists have failed for 20 years to develop a safe vaccine for other strains of coronavirus.

Dr. David Heymann, who led the World Health Organization’s response during the SARS epidemic, told The Guardian, “We don’t even know if a vaccine can produce an immune response which would protect against future infection.”

Dr. Anthony Fauci, head of the National Institute of Allergy and Infectious Diseases, said last week that he believes a vaccine will be the factor that makes the country round the turn on the pandemic.

Speaking to a panel of doctors from Harvard Medical School, Fauci said that with widescale awareness and adoption of public health measures such as social distancing and hygiene, there’s hope that there won’t be a “massive resurgence of COVID,” as Americans spend more time indoors during the fall and winter, “because what I would like to see is keeping the lid on it, keeping the baseline down till we get a vaccine,” which he expects will be available around the end of the year and “will be the thing that turns it around.”

President Donald Trump said that some $10 billion in taxpayer money is being pumped into the development of a vaccine and therapeutics. Trump, who dubbed the project Operation Warp Speed, has instructed the military to prepare for the potential delivery of 150 million to 200 million vaccine doses. The administration hopes a vaccine will be ready by the end of the year, but possibly as soon as October “for everyone that wants to get it,” Trump says.

“Not everybody’s going to want to get it,” the president added.

As of Sept. 16, more than 6.6 million people have tested positive for the virus in the United States, and at least 196,000 who tested positive have died, according to a Johns Hopkins tally.