As many countries and several states do away with mask mandates, a German study suggests that masking children causes more harm than good
Health 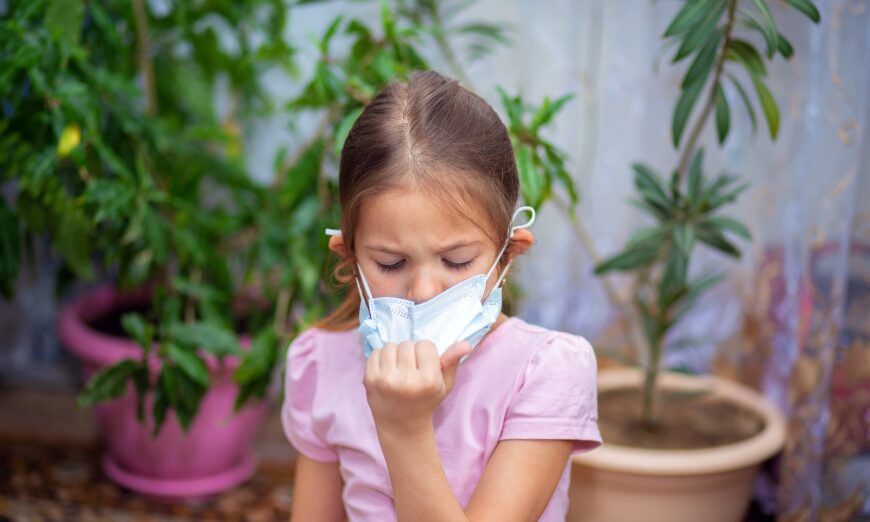 As any parent can attest to firsthand, our children—from tots to teens—have been experiencing more anxiety, psychological stress, and behavioral challenges since the COVID-19 crisis began in March 2020. Adults, too, have been suffering from extreme stress and anxiety.

Now a new retrospective study, looking at data from late 2020 and 2021, confirms what so many of us have long suspected: Masking as a prerequisite to classroom learning and participation in public life is causing children both psychological and physical harm.

The study, conducted at the University of Witten–Herdecke in Germany, includes data from more than 20,000 participants reflecting on the experiences of a total of 25,930 children. The average time the children wore masks was 270 minutes (4 1/2 hours) per day.

The majority of parents—68 percent—reported that masking harmed their children. In fact, parents reported psychological and physical harms associated with masking in 17,632 children. These reported harms included:

Though the study is retrospective and doesn’t purport to show a causal relationship between masking children and adverse effects, the team of German researchers argued that this data illustrates that adults must consider that some risk of exposure to coronavirus may be worthwhile in order to enable children to have a “higher quality of life without having to wear a mask.”

Dr. Jeffrey I. Barke, who wasn’t involved in the study, agrees. “We should always ask ‘At what cost?’ when considering any policy,” said Barke, a board-certified primary care physician in private practice in Southern California. Barke doesn’t mince words about the problems with requiring children, especially younger children, to wear masks.

“The masking of children causes direct harm,” he said, “including increased anxiety, depression, suicidal ideation, and learning disorders. And most importantly, it prevents the critical bonding between students and teachers because facial expressions aren’t able to be seen.”

As Yale University Emerita Professor of Psychology Marianne LaFrance explored in her book, “Why Smile? The Science Behind Facial Expressions,” human faces are a rich source of emotional, linguistic, and social signaling to other people. Facial expressions, LaFrance told me when I interviewed her several years ago, are much more complicated and intricate than people realize. From happiness to rage, our faces can and often do express an array of emotions—even contradictory emotions—at the same time.

But when children’s noses and mouths are blocked by masks and they can only see other people’s eyes, they have a much harder time not only learning to speak and understand language, but also learning social cues and emotional intelligence.

Babies as young as 8 months old begin to lip-read, according to an article in Scientific American. But, as Dr. David J. Lewkowicz, senior scientist at Yale University’s Haskins Laboratories, wrote in the same article, babies and young children can’t make the connection between lip movement and speech if they can’t see their caregivers’ mouths.

School Children Are Not Super Spreaders

The justification for masking young children, especially in school, is to avoid spreading coronavirus from asymptomatic children to adults. But data from Sweden shows that there’s little to no danger to adults (or to other school-aged children) when children attend school mask-free.

As Dr. Jonas F. Ludvigsson and three of his colleagues wrote in a letter published in the New England Journal of Medicine, despite Sweden having kept their preschools and elementary schools open without masking, there were very low incidences of COVID-19, both among the children themselves and among their teachers.

In fact, of the nearly 2 million Swedish school-aged children who continued to attend in-person school with free faces, only 15 children were admitted to the hospital with COVID-19. That’s equivalent to 1 in every 130,000 children.

Four of these children had serious underlying conditions (two had cancer, one had chronic kidney disease, and one had a blood disorder). No child with COVID-19 died.

Does Masking Children Even Work?

In addition to the harms masks may be causing, whether they actually work to stop the spread of COVID-19 is still an open question.

In November 2020, the Annuals of Internal Medicine published a randomized controlled study to evaluate the effectiveness of surgical face masks against SARS-CoV-2.

In this study, which included more than 6,000 people, a team of Danish scientists found that masks didn’t reduce the incidence of SARS-CoV-2 infections significantly. Infection rates were slightly higher among those who didn’t wear masks: 42 participants wearing masks (1.8 percent) tested positive for COVID-19 while 53 participants (2.1 percent) among those who didn’t wear masks tested positive. However, the difference in this sample wasn’t considered statistically meaningful.

The researchers concluded, in part, “The recommendation to wear surgical masks to supplement other public health measures did not reduce the SARS-CoV-2 infection rate among wearers.”

When researchers from Rational Ground (a COVID-19 information clearinghouse that provides “reasoned and fact-based analysis of the current pandemic using extensive charts, infographics, videos and other mediums,” according to their website) analyzed data from 50 states from May 1 to Dec. 15, 2020, they found no evidence that mandated masking slowed the spread of COVID-19.

In a detailed opinion piece about this data, Daniel Horowitz, senior editor of TheBlaze and host of the Conservative Review podcast, wrote: “The burden is on those who want to violate the Constitution with such a draconian mandate … to present affirmative evidence that their [masking] works. … But while they force us to prove 100 percent that they don’t work, mandaters don’t have to prove any efficacy at all, even as 2-year-olds are forced to have their faces covered on planes.”

The kind of mask also matters. As Dr. Peter Weiss explained in an article in The Epoch Times, the most commonly used masks are likely the least effective.

“Surgical masks are made of three plied layers of synthetic microfibers and extra-fine synthetic fibers, which block out much larger particles, but do a poor job of blocking the much smaller particles associated with COVID-19 viral transmission,” wrote Weiss.

Dr. Paul Alexander, an evidence-based medicine specialist and epidemiologist, agreed. “Our examination of the entire body of evidence regarding these blue surgical and white cloth masks shows that they are ineffective and confer no benefit.”

Alexander is a former evidence synthesis adviser to WHO/Pan American Health Organization for the COVID pandemic and former senior COVID pandemic adviser for the U.S. Department of Health and Human Services under the Trump administration.

“What is indeed frightening is that all of these blue and similar surgical face masks cause plastic fiber inhalation, and the outcomes could be devastating, especially to our children,” Alexander said. “These plastics will degrade very slowly over time, and as such, in the lungs it may remain and just build up to dangerous levels. We do not even know what is an ‘acceptable’ level, for there should be none, zero.”

Cloth masks, the type that most children are wearing to school, are also ineffective. In a randomized clinical trial of cloth masks used by hospital health care workers in Vietnam, almost 97 percent of the masks were penetrated by viral particles (compared to 44 percent of the medical masks.) In addition, workers wearing cloth masks were much more likely to contract respiratory infections.

Weiss likens a cloth mask to tying a rope around your waist while driving and claiming it’s a seatbelt. “It also isn’t too much of an exaggeration to say wearing a Gucci style face-covering … is like asking an X-ray technician to wear their grandmother’s kitchen apron when taking X-rays.”

In order for them to be effective, masks must be worn correctly. But in one study of mask wearers in Japan, where wearing medical masks is culturally normative (unlike in the United States), scientists found that only 23 percent of mask wearers complied with recommendations. The study, published in the International Journal of Environmental Research and Public Healthy, suggests that 77 percent of people in Japan don’t adequately follow mask guidelines.

If you spend time in any classroom in the United States where children are required to wear masks, you quickly see that most children are not wearing them correctly. The CDC guidelines stipulate that you shouldn’t touch your mask while you’re wearing it. But children (and adults) constantly touch their masks.

“I don’t generally see children wearing masks correctly,” said Angie Bowman, a mother of four and an educator based in Medford, Oregon. “I see them under their nose or chewing on the center of the mask, which then pulls it off the nose. And I’ve seen kids use their mask to wipe their nose and then put it back on. It’s gross. Their masks end up being wet and sticky and probably have more germs on them. Children, in my opinion, should not be wearing masks at all.”

The CDC recommends that reusable masks be washed as soon as they are soiled or at least once a day. But most parents are unaware of this directive and send their children to school wearing the same mask for days on end. Disposable masks, which are designed to be thrown away after a single use, are often re-worn for weeks.

What will be the long-term effects of masking and other COVID-19 mitigation measures on our children? No one can say for certain. What we do know is that suicide rates are at an all-time high in the United States, according to the World Health Organization, though that rate has been trending upward for some time. We have also seen sharp rises in child abuse and domestic violence since the beginning of the COVID-19 mitigation measures, as well as in overdose deaths, especially among young people. According to the CDC, more than 96,750 drug overdose deaths were reported between March 2020 and March 2021, an increase of almost 30 percent from 2019.

At the same time, more children than ever before are being prescribed anti-depressants, anti-anxiety drugs, and even anti-psychotics. So are adults. According to government data, there has been an upsurge in adults experiencing anxiety and depressive disorders since the beginning of the pandemic.

“I’m vehemently opposed to masking children,” said Sherry Syence, a mother of 11-year-old twins who lives in Asheville, North Carolina. “Not only does it jeopardize their physical health, it sends them a message that they’re vectors of disease. I don’t want my kids being in a fear-based environment. I want them to experience the full joy of childhood, to breathe freely, and to have normal interactions with other people that aren’t compromised by wearing a mask. They need to see other people’s full facial expressions.”

Syence’s twins attend a small homeschool co-operative where masking is up to the parents. Syence and her husband decided to take their children out of public school because of the mask mandates, among other reasons.

“Never mind that masks offer little if any protection against respiratory viruses,” Barke said. “Never mind that asymptomatic children simply don’t spread infection to at-risk adults. We must always ask what are the consequences of our mandates?”

Jennifer Margulis, Ph.D., is an award-winning science journalist and book author. She worked on a child survival campaign in Niger West Africa, taught post-colonial literature to nontraditional students in inner-city Atlanta, and appeared live on prime-time TV in Paris, France, to speak out against child slavery in Pakistan. She is a frequent contributor to The Epoch Times. Learn more and sign up for her free weekly newsletter at JenniferMargulis.net