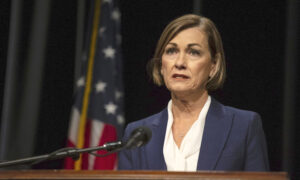 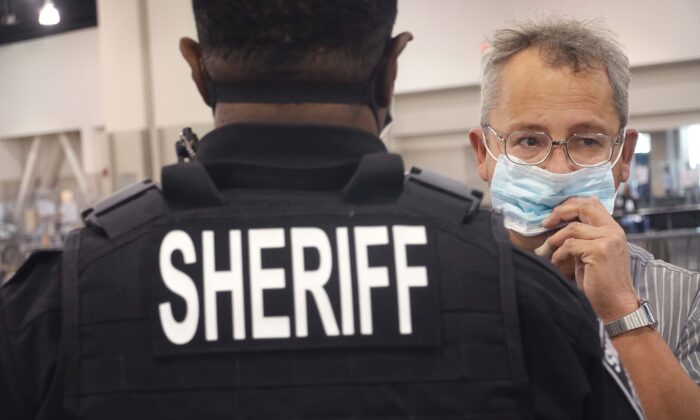 An observer is removed from the hall by police after refusing to properly wear a mask as election officials begin the recount process of ballots from the November 3 election at the Wisconsin Center in Milwaukee on Nov. 20, 2020. (Scott Olson/Getty Images)
PUBLIC HEALTH INFORMATION

Masks Have No Significant Effect Against CCP Virus: Study

A recent study on surgical mask-wearing found no significant difference in CCP virus infections between those who wore a mask and those who didn’t. But the study will probably not have any impact on mask-wearing, as many places are imposing lockdowns and strict mask mandates due to increasing cases.

The study, which was carried out in Denmark and published in the Annals of Internal Medicine, involved more than 6,000 participants who spent over three hours outside their homes. They were divided into two groups and observed for a month from April to May or May to June, where half of the people in each group were provided 50 three-layered, disposable surgical masks and given instructions on how to properly wear them.

At the time of the study preventative measures such as physical distancing and hand hygiene were practiced, but mask-wearing wasn’t enforced by the Danish government outside hospital settings.

The participants were tested for the CCP virus at the end of the month and the mask group was compared to those in the non-mask-wearing group.

The researchers found that wearing a “surgical mask when outside the home among others did not reduce, at conventional levels of statistical significance, incident SARS-CoV-2 infection compared with no mask recommendation.”

SARS-CoV-2 is another name for the CCP (Chinese Communist Party) virus that causes the disease COVID-19.

This is the first randomized controlled trial to address if masks protect the wearer from being infected with the CCP virus in a community setting. Its findings are contrary to that of the Centers for Disease Control and Prevention (CDC), which announced on Nov. 10 that “the prevention benefit of masking is derived from the combination of source control and personal protection for the mask wearer.”

Prior to the latest update, the CDC said that wearing a mask protected those around the wearer, and not specifically the person wearing the mask.

The Danish trial falls short when attempting to determine if masks mitigate the spread of the CCP virus, according to Dr. Lee Merritt, MD, an orthopedic surgeon and a member of America’s Frontline Doctors, as it “suffers from several flaws which they themselves admit: ‘Inconclusive results, missing data, variable adherence, patient-reported findings on home tests, no blinding, and no assessment of whether masks could decrease disease transmission from mask wearers to others.’”

She said there are currently no controlled studies that show widespread mask-wearing decreases the transmission of “small size virus infection,” although there have been “numbers of papers [that] have been published which have attempted to justify masking the world against the SARS-CoV-2 virus, but none actually demonstrate real world data to support the practice.”

There are, however, randomized controlled studies for influenza or influenza-like illness, that found that masks have little to no effect on whether a person contracts influenza or not.

The Danish study’s findings were “compatible with the findings of a review of randomized controlled trials of the efficacy of face masks for prevention (as personal protective equipment) against influenza virus.”

That review on masks for influenza was published in the CDC’s Emerging Infectious Diseases journal in May. Researchers evaluated randomized controlled trials of the transmission of the flu and mask-wearing, and determined that they “did not find evidence that surgical-type face masks are effective in reducing laboratory-confirmed influenza transmission, either when worn by infected persons (source control) or by persons in the general community to reduce their susceptibility.”

Proponents of mask-wearing argue that the studies on masks and influenza shouldn’t be applied to COVID-19, as the CCP virus is different from the flu virus and the trials were not conducted during a pandemic.

But Merritt said influenza is “a similar disease in size of virus and transmission characteristics.”

After the Spanish flu, the surgeon general of the U.S. Navy wrote in an annual report in 1919: “The wearing of face masks by healthy persons was made compulsory at several stations and on board a few vessels. On the whole this was not a practicable measure and little or no good was accomplished by the use of masks. The eyes were not protected. The masks quickly became soiled and required frequent adjustment by the fingers.”

He further continued: “No evidence was presented which would justify compelling persons at large to wear masks during an epidemic. The mask is designed only to afford protection against a direct spray from the mouth of a carrier of pathogenic microorganisms.”

At that time, masks were only recommended for visitors and those who “examine or wait upon the sick” at the hospital. And while masks were constantly worn at the hospital, the surgeon general said, “The morbidity rate, nevertheless, was very high among those attending the sick.”

Furthermore, those who wore a mask had a slightly higher incidence of influenza than those who didn’t wear a mask while caring for the sick during the epidemic.

“At the United States Naval Training Station, Great Lakes, Ill., of 674 hospital corpsmen and volunteers of other ratings who were on duty caring for the sick during the epidemic, 96 wore gauze masks. The others did not. Of the latter, 7.9 percent developed influenza, while 8.3 percent of those who wore masks contracted the disease.”

While masks are already mandatory in many U.S. states, daily cases continue to rise as the country heads into the flu season. Now, some states are expanding their mask mandates and imposing new lockdown measures, which the CDC doesn’t recommend if there’s already mask policies in place.

According to the CDC, “Adopting universal masking policies can help avert future lockdowns, especially if combined with other non-pharmaceutical interventions such as social distancing, hand hygiene, and adequate ventilation.”

In Pennsylvania, the secretary of health issued a stricter mask mandate (pdf) that began on Nov. 18 and will last until certain criteria are met. The Pennsylvania Department of Health did not reply to a request for comment on the criteria.

Pennsylvanians are required to wear a mask whether they are indoors in their own home when they have guests over at other indoor spaces, and while outdoors when unable to maintain physical distance. Warnings and citations will be given if masks are not worn, according to the order.

In New Hampshire, Gov. Chris Sununu announced a statewide mask mandate on Friday for the first time after saying he wouldn’t do so on Nov. 9 in response to Joe Biden’s call for governors to make masks mandatory.

Everyone over the age of five must now wear a mask while in public when they are unable to maintain six feet apart, whether indoors or outside. The order (pdf) took effect on Friday and will end on Jan. 15.

The Granite State was one of 16 that did not have a statewide mask mandate according to Patch.

North Dakota also announced for the first time a mask mandate (pdf) and other mitigation measures to curb the spread of COVID-19.

And in California, Gov. Gavin Newsom expanded his mask order on Nov. 16, requiring Californians to wear a mask whenever they are outside their home unless they meet certain criteria.