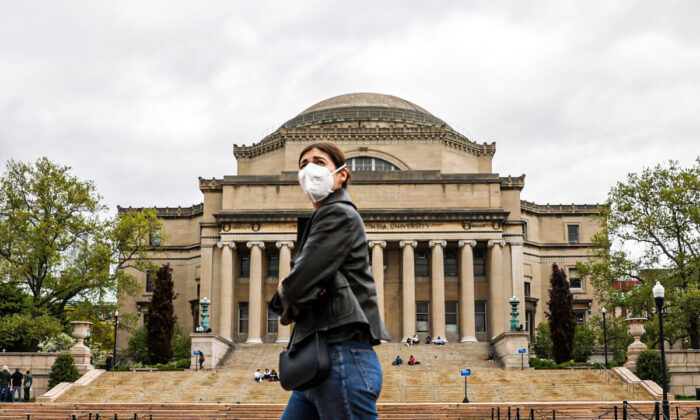 Two months after the federal government eased mask recommendations for most Americans, some colleges and universities have reinstated mask mandates, along with other measures, citing surges in COVID-19 cases on their campuses.

Several prominent institutions—including American University and Georgetown University in Washington, D.C.; Columbia University in New York; Johns Hopkins University in Maryland; and Rice University in Texas, to name a few—have brought back indoor mask requirements that were phased out not too long ago.

Many of these schools already have vaccine and booster mandates. For example, Columbia required all students and employees to submit proof of their booster vaccination before March, boasting an overall 99.9 percent compliance rate for the campus community. Yet it now demands that students wear surgical masks in classrooms because of an uptick of COVID-19 cases on campus and elsewhere in New York City.

“Based on the current situation and in an abundance of caution, we will require wearing of non-cloth masks in classrooms,” the Ivy League school announced on April 10. In a more recent update, the university said the requirement wouldn’t go away any time soon, despite an overwhelmingly high level of vaccination among the campus population.

“We anticipate making no changes in our current campus COVID-19 guidance, unless New York City puts in place measures that we would be required to follow,” Columbia officials said on April 22, noting a “gradual increase in COVID-19 cases” in the city.

Rice also requires all eligible students and employees to get booster shots. In mid-March, the Houston-based university lifted its mask mandate for vaccinated individuals, only to reverse the policy after less than a month because of a sudden rise in COVID-19 cases.

“There’s been a significant rise in the number of positive cases reported in our community—about 145,” the university said in an April 10 statement. Specifically, Rice demanded that everyone in a classroom wear a mask regardless of their vaccination status, except for instructors while lecturing, since 90 percent of those new cases have occurred among undergraduate students. Large events also have been canceled. Students can continue to eat in dining halls, but at half of the designated capacity.

According to a COVID-19 tracker on Rice’s website, the university has recorded 31 positive tests for the week following Easter. There’s also been a noticeable downward trajectory since April 10, but the restrictions remain in place.

Meanwhile, in Philadelphia, health officials and the mayor raised the city’s COVID-19 alert level on April 18, requiring citizens to wear face coverings when out in public. That has prompted a number of schools, including the University of Pennsylvania, Temple, St. Joseph’s, La Salle, Drexel, and Thomas Jefferson universities, to require students and staff to mask up while in school buildings.

All of these Philadelphia schools went mask-optional again just three days later, when the city announced that it not only has reversed the decision to reimpose the mask mandate, but also ditched the COVID-19 alert system that triggered it.

Kenney was referring to a U.S. district judge in Florida who struck down a federal rule requiring face coverings for planes and other forms of public transportation, as well as the decision by SEPTA, Pennsylvania’s regional transit authority, to lift the requirement that travelers must wear masks on its buses and trains.

Florida’s universities were among the earliest in the nation to drop their mask mandates. South Florida University has been mask-optional since August 2021, while the University of Florida said it simply doesn’t have the authority to force people to mask up on campus.

“The university does not currently have the authority to take the actions you recommend,” University of Florida President Kent Fuchs wrote in response to the Alachua County Commission, which had asked the school to adhere to a public health emergency declaration that mandated masks indoors.