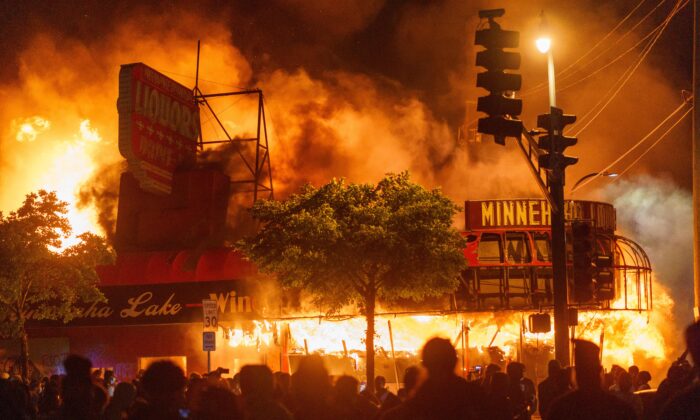 Protesters gather in front of a liquor store in flames near the Third Police Precinct in Minneapolis, Minnesota, on May 28, 2020. (Kerem Yucel/AFP via Getty Images)
Defending America

Marxists seek to advocate and facilitate riots, such as the 2020 unrest in the aftermath of the death of George Floyd, in a bid to subvert American society and pave the way for a socialist takeover, according to professor of philosophy and author Douglas R. Groothuis.

“The goal is to destabilize America, and to threaten the opposition,” Groothuis recently told Epoch TV’s “China Insider” program.

The ideological basis of the 2020 riots demanding racial justice after Floyd’s death is the Marxist-rooted critical race theory, he noted.

“That’s a kind of new Marxism or cultural Marxism, that expands the categories of oppressor and oppression to include racial minorities,” Groothius said.

“On the far left and critical race theory, the idea is that America is systemically and intrinsically racist. And so they went to the streets basically saying, ‘We want to tear it all down,’” he added.

The expert called this “a very radical and dangerous kind of movement,” that had been facilitated by a lack of awareness of many Americans, as well as the inaction of others.

“If you have a generation that doesn’t know how evil communism is, and how dangerous it is to liberty, to life, to everything good, to faith, to religious freedom, and if the people who believe in the American vision are sleepy, or are just dying out, then I think America is in trouble,” Groothius said.

“A lot of our institutions have been corrupted by far-left thinking and by socialist thinking,” he said, citing universities, mainstream media, public schools, and Hollywood as examples.

To illustrate this point, Groothuis accused the mainstream media of giving a free pass to the rioting in 2020 by diminishing the level of violence involved in its coverage and insisting the demonstrations were “mostly peaceful.”

“We saw with these riots in 2020, that people on the left did not condemn the riots. It might have taken them a few months to say, ‘well, it’s a better idea not to do this,’” he said.

According to Groothuis, the advocacy of critical race theory, and other ideas such as diversity, equity, and inclusion has ramped up under the Biden administration.

As the United States awaits the Supreme Court’s final decision on whether Roe v. Wade, the 1973 ruling which found a constitutional right to abortions, will be overturned, the expert raised concerns that “very strong pro-abortion supporters will take to the streets” if it is overturned.

The leaking of the Supreme Court’s draft opinion in May was for the purpose of mobilizing the pro-abortion camp to take action, he said.

“There’ve been demonstrations at the homes of judges,” he said. “This is actually illegal [but] nothing was done about it.”

To counter such Marxist-style movements, the expert urged Americans to return to the country’s founding principles.