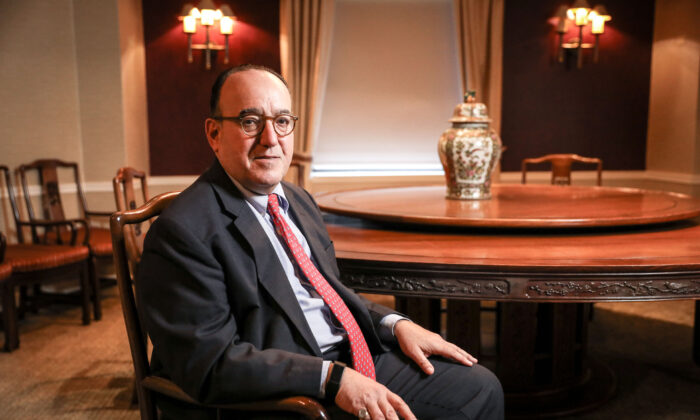 Marxist Revolution in the Making in America, Expert Warns

There’s a phenomenon being observed in America today: “an attempt at changing reality” to foster a new Marxist revolution, says Mike Gonzalez, an author of two books on the topic.

According to Marxist thought, “reality is just put together by our conceptual framework,“ Gonzalez told EpochTV’s “Crossroads” program.

Most people believe reality can’t be changed, because they believe in an ultimate and fundamental truth—in natural law, or in God—but Marxists don’t believe any of that, Gonzalez said.

Black Lives Matter (BLM) used the death of George Floyd as an excuse to change society, he said, “to dismantle the organizing principle of society”—in the words of BLM co-founder Alicia Garza.

Gonzalez says the concept of “black lives matter” is “unimpeachable.”

“Seven billion people on earth matter. And we’re all children of God. But I think it’s important—given our history—to affirm that the lives of our black co-citizens, compatriots, matter because we know the history.”

But Black Lives Matter is also the movement and the organization BLM Global Network Foundation (BLMGNF), said Gonzalez, a senior fellow at the Heritage Foundation.

“We actually do have an ideological frame. Myself and Alicia [Garza] in particular are trained organizers. We are trained Marxists,” Patrisse Cullors, a BLM co-founder, said in a 2015 interview with Real News Network.

Gonzalez wrote for the Heritage Foundation, “Cullors trained for a decade as a radical organizer in the Labor Community Strategy Center, established and run by Eric Mann, a former member of the Weather Underground, the 1960s radical faction identified by the FBI as a domestic terrorist group.”

The group, originally called “Weathermen,” said in its 1969 foundational statement that it was dedicated to “the destruction of U.S. imperialism and the achievement of a classless world: world communism.”

Garza was trained by the School of Unity and Liberation (SOUL), an institution founded by Harmony Goldberg, Ph.D., a scholar in cultural anthropology, Gonzalez said.

Goldberg is also an expert on Antonio Gramsci (pdf), the founder of Italy’s Communist Party in the 1920s and a Marxist intellectual. She understands Gramsci’s theory of the war of position, which is the concept of recruiting, organizing, training, and convincing people to replace one culture with another culture, Gonzalez said.

Gonzalez cited the words of Gramsci, who said that in the West, in societies with strong civic society, you need to have a war of position.

Gramsci likened political “warfare” to military warfare, in which the war of position is akin “to trench warfare, settling in for a long-term struggle with strategic smaller victories to gain more territory bit by bit,” as opposed to the warfare of movement, which is like “a rapid military attack,” Bradley Thomas, a libertarian activist and writer, wrote for the Foundation for Economic Education (FEE).

“In other words, you have to take the worker, infiltrate them, indoctrinate them, teach them that the family was a form of oppression, teach them that the nation-state was a form of oppression, teaching that private property led to war and more oppression. That is what we have today, except here in America, we practice it through the lens of the race with critical race theory,” Gonzales said.

The core of Marxist thought is that the family, the nation-state, private property, as well as the beliefs in God and religion, had to be abolished, Gonzalez said, adding that the workers at that time didn’t agree with any of that.

From the mid-19th century until 1917, when the first Marxist revolution succeeded, the workers during these 70 or so years liked the nation-state, were patriotic, loyal to God, and really liked private property, he said.

Therefore, the Marxist revolution failed miserably in Central and Western Europe—exactly the place where Marx had said it would succeed, Gonzalez said.

“These communist thinkers in Italy and Germany came up with the idea that Marx had been right on the strategy on getting rid of the nation-state and private property, but his tactic needed to be upgraded.

“Marx’s tactic was that it was going to be the material forces of society—economics—was going to determine everything,” but these communist intellectuals in the 1920s in Europe realized that it was culture—not economy—that accounts for how man behaves, Gonzalez said. “The Marxism we see in America today—it’s that type of Marxism.

“The communists who trained the founders of BLM organizations … took their cues from these cultural Marxists of the 1920s from Europe.”

At a 2019 gathering of progressives in Maine, Garza said, “America itself was founded on violence, steeped in white supremacy, and predicated on theft and genocide.

Gonzalez said: “In 2020, we had months of destabilization. And … with critical race theory, there’s been a real attempt at changing our culture from within.”

According to the U.S. Crisis Monitor, 633 riots took place in 2020 after the death of George Floyd, Gonzalez said. The Insurance Information Institute said that these riots were the costliest civil unrest in U.S. history, with insured losses estimated at over $2 billion.

BLM activists were involved in 95 percent of the riots for which the identity of the perpetrators was known, according to Gonzalez.

“I take that seriously. … That’s why I wrote my book: BLM: The Making of a New Marxist Revolution,” Gonzalez said.

Representatives of Black Lives Matter didn’t respond to a request for comment by press time.

The results of the riots are still felt today, the expert noted.

“The jump in the murder rate in 2020 was astronomical; it was 30 percent,” Gonzalez said. “It was the highest increase in the homicide rate in history.

“We know from statistics that over 50 percent of people murdered are African Americans. This is a lot of additional black lives that were lost. Don’t they matter?”

BLM had a plan when it carried out protests and riots in 2020, he said.

The organization proposed federal legislation in July 2020 called the BREATHE Act. The measure, which was sponsored by Reps. Rashida Tlaib (D-Mich.) and Ayanna Pressley (D-Mass.), called for defunding the police and replacing them with a new approach to community safety. Cullors, BLM executive director at the time, described this approach as a “new, non-punitive, and non-carceral approaches to community safety that would incentivize states to shrink their criminal-legal systems and center the protection of Black lives,” according to a BLM report.

BLM also partnered with the Broadway musical “Hamilton” and the Sprite soda brand to increase voter turnout in the 2020 election, the report said. The organization has been spreading its curriculum that promotes critical race theory in the country’s 14,000 school districts, Gonzalez wrote in his book.

The organization has millions in financial resources obtained through fundraising.

“Across our entities and partners, we have raised just over $90 million in one year, 2020” with an average donation of $30.64, the BLM report said. Expenses such as staffing, operating and administrative expenses, civic engagement, programs, field expenses, rapid response, crisis intervention, and its “get out the vote” campaign amounted to $8.4 million.

BLM sent out 127 million emails related to their activities in 2020, which resulted in 1.2 million actions taken, according to its report.

In addition to the book about BLM, Gonzalez is also the author of “The Plot to Change America: How Identity Politics Is Dividing the Land of the Free.”

He explained why he penned these books that expose the Marxist infiltration in the United States.

“The fact that I spent the first 12 years of my life in a communist country in Cuba has made me recognize them right away. … I know how culture was destroyed. I know how a country was destroyed. America is my country. I don’t want to see happen to America [what has happened] to the country of my birth.”