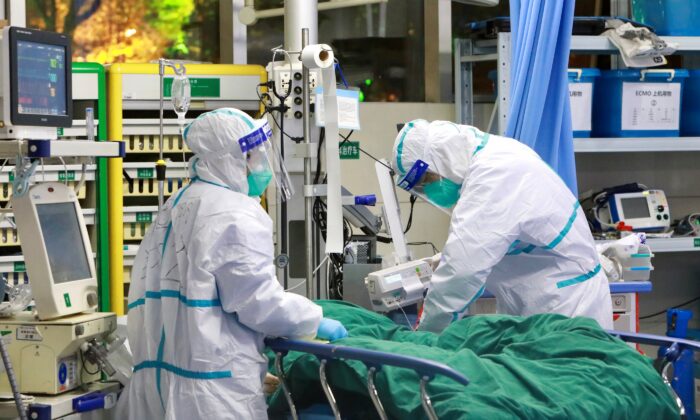 Medical staff in protective suits treat a patient with pneumonia caused by the new coronavirus at the Zhongnan Hospital of Wuhan University, in Wuhan, Hubei province, China on Jan. 28, 2020. (China Daily via Reuters)
By Emel Akan

WASHINGTON—The outbreak of a new coronavirus in China has raised concerns about the disease’s potential impact on the Chinese economy, causing volatility in global stock markets and oil prices.

The epidemic that originated in the central Chinese city of Wuhan and spread across the country is expected to hit China’s economic growth, as the panic has weighed on tourism, consumption, and manufacturing.

The virus also has spread to other countries, including the United States, rattling investors further.

Mounting fears and uncertainty sent major stock markets lower on Jan. 27, with travel, luxury goods, and mining sectors leading the drop. London’s FTSE 100 index slid 2.3 percent while Germany’s DAX index was down 2.6 percent. U.S. shares also lost at the start of the week with the Dow Jones and the S&P 500 dropping about 1.6 percent.

Though the markets have seen some recovery at the time of this writing, the fast-spreading virus is still a big worry facing investors.

Oil prices also tanked due to worries of a negative shock to global oil demand.

“We are very carefully monitoring the situation,” he said. “There will clearly be implications, at least in the near term, for Chinese output, and I would guess for some of their close neighbors.”

The coronavirus outbreak comes as China’s economy is already growing at its slowest pace in nearly three decades. The U.S.–China trade war took a toll on the country’s exports in 2019. And China’s economic troubles may be more severe than official data indicates, according to experts.

Official figures report thousands being infected in China and more than a hundred killed. However, experts say the actual number infected is much higher.

Uncertainty about the scale and duration of the epidemic will impact China’s gross domestic product (GDP), as it will hurt corporate and consumer confidence, leading to a drop in business and consumption activities, according to economists.

If the panic continues until April or May, it will have an “enormous effect” on the Chinese economy this year, he added.

According to Chang, the crisis will have some ripple effect in the United States and other countries, but the impact will not be as significant as people fear.

The reactions of foreign companies operating in China will be more visible after the Lunar New Year holiday, he noted.

Chinese officials extended the holiday across the country by three days to Feb. 2 in an effort to keep citizens home and stem the spread of the disease. However, uncertainty remains as the number, and geographical spread of confirmed cases of pneumonia keeps growing.

“Of course, the Chinese government is going to try to stimulate the economy through various artificial measures that will have a temporary alleviating effect,” Chang said, adding that these efforts won’t help much “because this is going to rock confidence in China.”

Automakers, including GM, Honda, and Nissan, have significant operations in Wuhan, according to a CNBC report. And some factories have already started to withdraw their employees from the Wuhan area.

More companies are expected to suspend their operations in the country.

The coffee chain Starbucks announced that it closed more than 2,000 stores—half of its China stores—due to the coronavirus outbreak.

Most of the confirmed cases in the coronavirus outbreak are concentrated in Hubei Province. Situated in central China, the province is an important transportation and manufacturing hub for the country. Hubei represented 4 percent of national GDP in 2018, according to Morgan Stanley.

The Lunar New Year holiday is usually a boom period for consumption and tourism, but the outbreak is having a significant impact on both consumer spending and travel. Chinese consumers are avoiding crowded areas.

Foreign travel to China has also slowed significantly. Many countries have started to curtail flights to China, with British Airways halting its daily flights to Beijing and Shanghai. U.S. carriers have also suspended some flights between the United States and China.

As media coverage ramps up, a “fear factor” affects the markets negatively, according to Michael Binetti, a retail analyst at Credit Suisse.

U.S. retail stocks with significant China exposure such as Nike (ticker: NKE) and Estée Lauder (EL) could suffer a 3 to 5 percent drop in earnings per share, he wrote in a report.

Many analysts are comparing the coronavirus outbreak to the 2003 SARS epidemic that rattled Asian markets and economies.

“While the severity of the economic impact is unknown, it is likely to be short-lived should it follow the pattern of historical cases,” Andrew Tilton, chief Asia Pacific economist at Goldman Sachs, said in a report.

“In the SARS case and other recent outbreaks, the trough in activity typically occurred 1–3 months following the outbreak.”

Drawing lessons from previous epidemics, Goldman Sachs estimates that tourist-related spending, such as jewelry, and discretionary spending, such as on apparel and home appliances, in China, Hong Kong, and Taiwan are most vulnerable to the impacts of the infectious disease. Also, restaurants, retailers, and department stores will likely be negatively affected by the outbreak.

Past incidents suggest that the economic impact of infectious diseases tend to last for one to two quarters, according to a report by Morgan Stanley.

The studies from academia, international agencies, and Morgan Stanley’s econometric model suggested that the impact of SARS on China’s annual GDP growth was around one percentage point, the report said.

The outbreak has also caused volatility in oil prices. The jet fuel market is expected to suffer the most, according to analysts.

Organization of the Petroleum Exporting Countries (OPEC) President Mohamed Arkab told reporters on Jan. 27 that he expected the outbreak of coronavirus to have little impact on the global oil market for now. He added that oil producers were ready to react to any new developments.

“The bottom line for oil is that we have never seen a quarantine of this magnitude. Planes and trains are not moving, and factories are closed and will cause a historic hit to energy demand,” Flynn wrote.