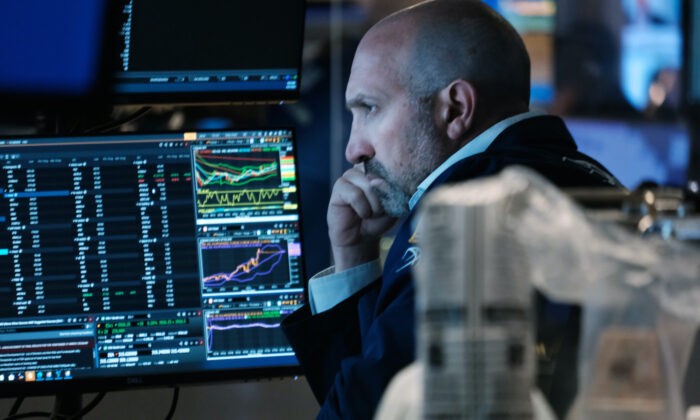 A trader on the floor of the New York Stock Exchange (NYSE) on June 27, 2022. (Spencer Platt/Getty Images)
Inflation

Markets are bracing for the release of government data on inflation on Wednesday, with analysts predicting prices grew 8.8 percent in June, outpacing the prior month’s pace, putting the Fed on track to maintain its path of aggressive rate hikes.

Analysts at a number of Wall Street banks and other financial institutions have issued forecasts predicting that when the Bureau of Labor Statistics (BLS) releases its inflation data on July 13, the number could be as high as 8.9 percent in annualized terms.

At the low end, Visa and JPMorgan expect the Consumer Price Index (CPI) data to show prices grew 8.6 percent in June, while at the high end, Citi and BNP Paribas are forecasting 8.9 percent, with the median around 8.8 percent.

Inflation in May came in at 8.6 percent year-over-year, the highest level in 41 years.

Another high reading—especially one that shows inflation picking up its pace—is likely to cement expectations that the Federal Reserve will continue to tighten monetary policy aggressively in a bid to cool soaring prices.

‘When Will Inflation Peak?’

The Fed recently hiked rates by 75 basis points and signaled it would stay on track with restrictive policies if inflation stays high and other economic conditions warrant.

“Across the economy, consumers, business leaders, investors, and regulators are all asking the same question: When will inflation peak?” Bankrate Senior Economic Analyst Mark Hamrick told The Epoch Times in an emailed statement.

“Central bankers were caught flatfooted and are now trying to play catch-up and recover some of their bruised credibility,” he added.

Fed officials have said their policies can’t do much to address supply-side constraints and so members of the Federal Open Market Committee (FOMC), the central bank’s rate-setting body, are left trying to destroy demand to balance the equation and ease price pressures.

“Hence, to bring inflation back in line with the Fed’s 2 percent mandate over time, the Fed views a slowdown in aggregate demand as necessary,” he added.

The Fed faces a tightrope walk between cooling demand enough to quell price pressures but not enough to tip the economy into a recession.

“Historically elevated and sustained inflation has heightened concern a recession could be the next added cross to bear,” Hamrick said.

A recent survey by MagnifyMoney shows that 70 percent of Americans believe a recession is coming while around two-thirds say they’re not financially prepared to face one down.

The survey, carried out on a sample of 2,082 respondents, also shows that 68 percent don’t feel financially ready for a recession.

The poll also shows that the top warning sign (88 percent) of a coming recession is inflation.

“Even when the peak of inflation is eventually seen in the rearview mirror, it seems unlikely that we will have moved past the point of concern about high prices,” Hamrick said.

Short-term inflation expectations among Americans have jumped to a new record high, according to the latest data from the Federal Reserve Bank of New York.

“Median one-year-ahead inflation expectations increased to 6.8 percent, from 6.6 percent in May, marking a new series high,” the Fed said in a July 11 statement.

Economists and traders expect the Fed to raise the benchmark rate by another 75 basis points when the FOMC meets at the end of July.