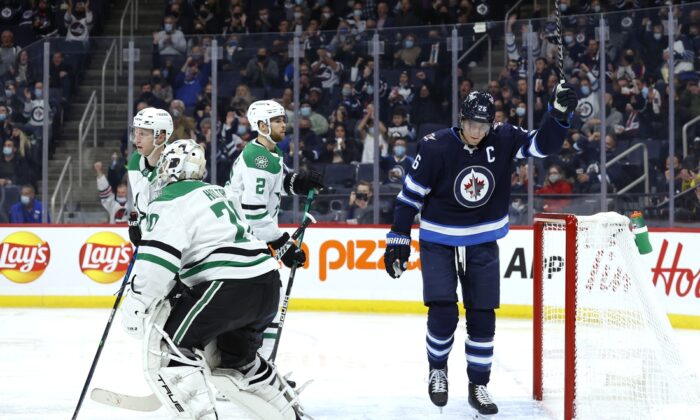 Mark Scheifele Returns to Lead Jets to So Win Over Stars

Mark Scheifele returned after missing five games while in the COVID-19 protocol and scored the deciding goal of the shootout as the Winnipeg Jets defeated the visiting Dallas Stars 4–3 Tuesday night.

Kyle Connor also scored in the shootout for Winnipeg, which has won five of its past six (5–0–1).

Paul Stastny, Josh Morrissey, and Pierre-Luc Dubois scored in regulation for the Jets, and Eric Comrie made 24 saves. Nate Schmidt had two assists.

Tyler Seguin had a goal and an assist and Jamie Benn and Jason Robertson scored in regulation for Dallas, which rallied from a 3–1 deficit to force overtime. Braden Holtby made 32 saves, including four in overtime when Winnipeg dominated possession time.

Joe Pavelski had the lone shootout goal for Dallas, which has lost four straight (0–2–2).

The Jets took a 1–0 lead at 10:29 of the first period when Nathan Beaulieu’s shot from the point deflected off Stastny in front of the crease and past Holtby.

Benn tied the score 1–1 at 16:16 of the opening period. After a faceoff, Seguin intercepted the puck along the right boards and centered it to Benn, who, all alone in front of Comrie, deked the goalie and slid the puck in.

Morrissey gave the Jets a 2–1 lead when he scored on a one-timer from above the right circle during a power play 32 seconds into the second period.

The Stars thought they tied it about five minutes later when Roope Hintz scored, but the Jets challenged the goal, and after a video review, the play was ruled offside.

The Jets added another power-play goal at 7:23 of the middle period on a power play. Holtby made the initial save on Scheifele’s shot, but the rebound deflected in off Dubois’ skate.

Robertson pulled the Stars within 3–2 on a power play when he knocked the puck in during a scrum in front of Comrie at 9:37 of the third period.

John Klingberg helped tie the score 3–3 at 13:16 when he sent a wrist shot toward the net and it deflected in off Seguin.