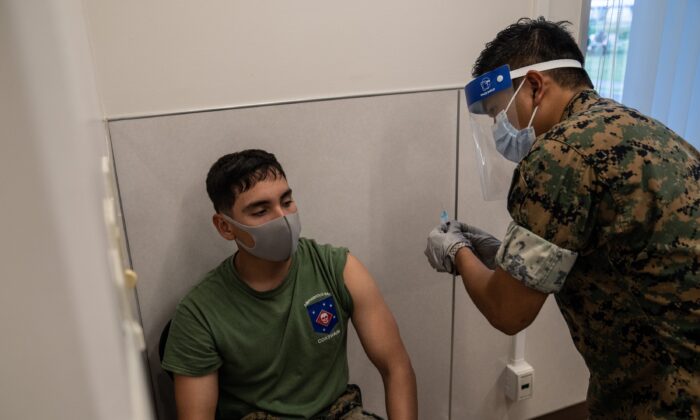 New guidance from the U.S. Marines has said that Marines who don’t get the COVID-19 vaccine face separation.

A Marine Administrative Message (MARADMIN) was posted to the Marine Corps’ website over the weekend, saying that “Marines refusing the COVID-19 vaccination, absent an approved administrative or medical exemption, religious accommodation, or pending appeal shall be processed for administrative separation [in accordance with] this MARADMIN and supporting references.”

“General Court-Martial Convening Authorities (GCMCA) retain authority to take any additional adverse administrative or disciplinary action they deem appropriate,” said the message, which was signed Oct. 23. It applies to both active-duty and reservists.

An order handed down by the Department of Defense several months ago stipulates that active-duty Marines face a Nov. 28 deadline to get fully vaccinated, while reservists face a Dec. 28 deadline to do the same.

According to the MARADMIN message, a Marine is deemed to have “refused the vaccine” if they cannot obtain a medical or administrative exemption, or a religious exemption—or if  they have “willfully disobeyed a lawful order from a superior commissioned officer to be vaccinated against COVID-19.”

Marines who are kicked out for refusing the vaccine cannot be eligible for involuntary separation pay and will potentially face “recoupment of any unearned special or incentive pays and advance educational assistance,” according to the message.

The Marine Corps, in its most recent update, reported that 83 percent are fully vaccinated, and 92 percent are partially vaccinated. The Navy has said that 93 percent of active-duty sailors are inoculated, while 98 percent have gotten at least one dose.

Some Republican lawmakers raised concerns that the Pentagon’s vaccine mandate for service members would hurt morale or force many to leave, potentially triggering a national security issue.

A week ago, Sen. James Inhofe (R-Okla.), the ranking Republican on the Armed Services Committee, sent a letter to Defense Secretary Lloyd Austin warning that mandates are “haphazardly implemented and politically motivated” and “risk irrevocable damage to our national security,” which is greater than any “external threat.”

Around the same time, Sen. Mike Lee (R-Utah) said on the Senate floor that he’s heard from nearly 300 servicemembers who said they would have to choose between serving in the military and getting the vaccine.

“It’s un-American, it’s unfair and it’s immoral,” Lee said before adding that he’s “not anti-vaccine” and is himself vaccinated.

But during a press conference on Monday, Pentagon press secretary John Kirby asserted that the vaccine bolsters national security.

“We believe that the vast, vast majority, and the numbers are bearing that out, of our men and women understand that too, and are getting the shots and are getting themselves protected so that they can also protect their families, their units and their communities,” Kirby said.

About two weeks ago, the Navy released its own message stipulating that active-duty or reservist personnel would be kicked out for not getting the COVID-19 vaccine.