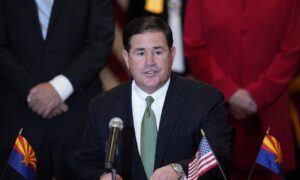 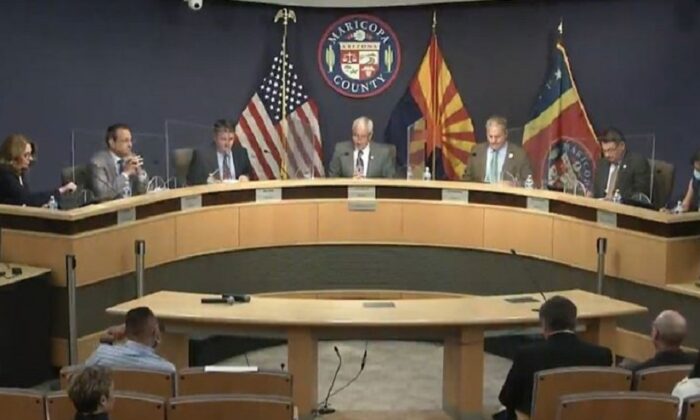 In this image from video captured from the Maricopa County Board of Supervisors website, Chairman Jack Sellers, center, and members hold a meeting regarding requests by the Arizona Senate in Maricopa County, Ariz., on May 18, 2021. (Screenshot via The Epoch Times)
Election Integrity

Officials in Arizona’s largest county on Monday urged the state Senate to bring to an end an audit that is reviewing ballots cast and machines used in the 2020 presidential election.

In the 14-page document, the board, which is mainly comprised of Republicans, attempted to counter accusations by auditors that the county handed over nearly 2.1 million ballots without chain-of-custody documentation and with discrepancies in some ballot batches.

Auditors had also said they found an entire database directory from an election machine had been deleted.

The board called the accusations “false, defamatory, and beneath the dignity of the Senate.” Members said they had provided proper chain-of-custody documentation to the state Senate’s liaison, former Republican Secretary of State Ken Bennett. They also said that each box was sealed with tamper-evident tape or “standard clear sturdy packing tape” and that the supposed batch discrepancies stemmed from a misunderstanding of how election tabulation works.

Board members challenged the claim of database deletion, asserting that no data was deleted on April 12.

County Recorder Stephen Richer, a Republican, told members in a meeting on Monday that he witnessed the transference of all election databases to the Senate and that the Dominion passwords are not needed to run any operations, including elections.

The county’s position does not affect the audit, which is currently on hold as high school graduations take place in the Arizona Veterans Memorial Coliseum. Auditors will re-enter the facility next week, according to an agreement obtained by The Epoch Times.

The board also continued refusing to provide routers or router images to auditors.

Asked for a comment on the board’s new letter, Fann, the state Senate’s president, told The Epoch Times that the Senate will hold a hearing/meeting to receive an update on the audit from the vendor and to address questions submitted to them and the county’s recent communications.

Fann threatened to subpoena Maricopa County officials over their refusal to fully comply with the subpoenas but backed off that threat last week, instead laying out her concerns in a letter and asking officials to attend a May 18 meeting to answer questions.

County officials said they will not attend the meeting, which will take place at 1 p.m. Mountain Time.

Supervisor Bill Gates of the GOP said on Monday that the board respected the decision by the judge but added that it would not participate in “a political theater” by joining the meeting.

Maricopa County has long resisted having its election materials audited, taking the matter to court after subpoenas were issued last year. But a county judge ruled in February that the subpoenas were valid and should be obeyed.

Routers were listed in the subpoenas, as was access to election machines.

Chairman Jack Sellers, a Republican, indicated that the county would no longer cooperate with the state Senate or its auditors.

“This board is done explaining anything to these people who are playing investigator with our constituents’ ballots and equipment paid for with real people’s tax dollars,” he said.

“I would hope that Senate President Fann steps up, show some political courage, pushes back, gets rid of these contractors that have no business at the Coliseum,” Supervisor Steve Gallardo, a Democrat, added.

The defiance from the board rankled some Republicans.

Kelli Ward, chair of the Arizona GOP, said in a video that the board members “view themselves as above the law, above review, above reproach.”