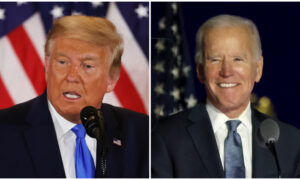 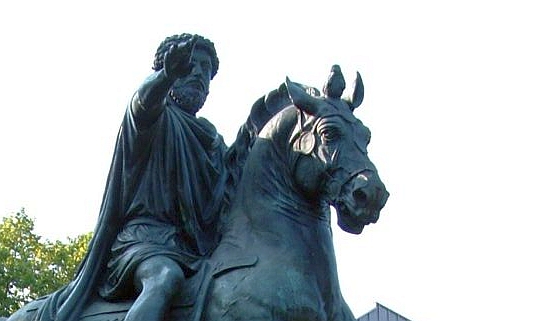 The statue of Marcus Aurelius on the Brown University campus on Aug. 31, 2007. (Apavlo/Public Domain)
Viewpoints

Marcus Aurelius at Brown and the ‘Meditations of Joe Biden’

I learned Tuesday morning via the estimable The College Fix that one of my historical heroes, Marcus Aurelius, barely escaped having his statue at Brown University go the way of so many others during our current imitation of China’s Great Proletarian Cultural Revolution.

The student council saved the Roman emperor by a narrow margin for now but apparently his Stoic philosophy is not popular on campus, assuming the supposedly well-educated Ivy Leaguers have the slightest idea what that is.

Writes the student newspaper The Brown Daily Herald, “46.4 percent of general body members who voted decided in favor of endorsing DAB’s [Decolonization at Brown—evidently the organization that wanted the statue trashed] initiative, and 39.3 percent voted against endorsement, and 14.3 percent abstained.”

Marcus Aurelius—saved by the abstainers.

Not so me, because, as it happens, my personal “colonization” from two thousand or so years ago actually increased earlier this year—the gang at DAB might have to “cancel” me—through reading Donald Robertson’s fascinating “How to Think Like a Roman Emperor: The Stoic Philosophy of Marcus Aurelius.”

This led me back to the emperor’s “Meditations,” a book, actually an assembly of twelve books, I hadn’t thought about since college and was too young then to appreciate.

With its Stoic philosophy blending aspects of Zen Buddhism and cognitive therapy it appeared to me now extraordinarily modern and more insightful than anything I had read by any contemporary politician. (Imagine the “mediations” of Joe Biden.)

One of Marcus’ pithy “Meditations” reads: “The happiness of your life depends on the quality of your thoughts.” Another: “Waste no more time arguing what a good man should be. Be one.”

How would the latter play with our campus Social Justice Warriors who not only “waste time” but destroy the social fabric by endlessly categorizing what all of us “should be” through the rigid separatist doctrine of critical race theory?

For some time now, we have been going through a period of institutionalized know-nothingism when parents pay upwards of seventy thousand dollars a year for the privilege of having their children debate tearing down the statues of historic geniuses.

Unfortunately, this has long since metastasized from our colleges into the culture at large and now into the beating heart of a putative Biden administration, if it happens.

Thought control, laced with yahooism as it always is, is on the march. The new administration (save us from it) would codify it.

“Richard Stengel is the Biden transition ‘Team Lead’ for the US Agency for Global Media, the US government media empire that includes Voice of America, the Middle East Broadcasting Networks and Radio Free Europe/Radio Liberty.

“Stengel, an Obama administration alumnus, wrote last year in a Washington Post op-ed that US freedom of speech was too unfettered and that changes must be considered. [emphasis mine]”

And in what way does Mr. Stengel think freedom of speech is “too unfettered”? Hint: It’s not just yelling fire in a crowded theater. In fact, I would wager in Stengel’s view there shouldn’t be any crowded theaters, most likely ever again.

He’s already weighed in about the novel coronavirus, called hereabouts the CCP virus, in this regard:

“The First Amendment doesn’t protect false speech about a virus or false speech that endangers the health of your users. And by the way, Facebook and Twitter have been taking things down, but they need to be even more vigilant about it, and Google needs to be even more vigilant about what they prioritize in their search results. They need to prioritize factual information in their search results, rather than emotional and inflammatory conspiracy theories that get people’s eyes.”

More censorship from social media? Is that even possible? If it were, I imagine the Decolonization at Brown committee, or whatever they are called, would approve.

And how would Mr. Stengel define what is “false speech” about a virus?

Would that include, say, the 632,926 concerned citizens, 12,048 medical and public health scientists, and 34,860 medical practitioners, many of them quite eminent from Oxford University and so forth, signers of the Great Barrington Declaration, who oppose the mandatory mask-wearing and lockdowns called for by Biden and himself?

For the record, Mr. Stengel also attended Oxford, but in English and history. He has no discernible professional expertise in science but, as he no doubt is aware, “settled science” is one of the most obvious and reactionary of all oxymorons—yet he still thinks someone should be exercising thought control over those who would mislead us on the virus.

Who exactly would make that decision? Dr. Anthony Fauci? Then Fauci would have to censor himself because he has contradicted himself on numerous occasions. At least one of those times, and probably more, he has therefore been “false,” as Stengel would put it. Should we cancel the canceler?

On the Chopping Block

More and better speech used to be the answer to erroneous speech, but apparently not to Mr. Stengel. The people are not to be trusted to make up their minds for themselves.

Freedom of speech, like the statue of Marcus Aurelius at Brown, is on the chopping block. MA himself, were he alive today, would doubtless have some pungent words on the matter.

One wonders if any of the self-described progressives in Decolonization at Brown have ever read any of the old Roman emperor’s “Meditations.” If they had, they would have come upon these words, as relevant now as they ever were:

“When you wake up in the morning, tell yourself: the people I deal with today will be meddling, ungrateful, arrogant, dishonest, jealous and surly. They are like this because they can’t tell good from evil. But I have seen the beauty of good, and the ugliness of evil, and have recognized that the wrongdoer has a nature related to my own—not of the same blood and birth, but the same mind, and possessing a share of the divine. And so none of them can hurt me. No one can implicate me in ugliness. Nor can I feel angry at my relative, or hate him. We were born to work together like feet, hands and eyes, like the two rows of teeth, upper and lower. To obstruct each other is unnatural. To feel anger at someone, to turn your back on him: these are unnatural.”

A bit more sophisticated, is it not, then anything we are used to from our politicians? And it was written by the emperor, we are told, as an exercise in self-improvement with no thought of publication, yet here it is a classic nearly two thousand years later.

Marcus Aurelius will surely survive whatever the clowns at Brown wish to do to him. Equally sure, no matter how our election turns out, no one will be reading the ”Meditations of Joe Biden” two thousand years from now.