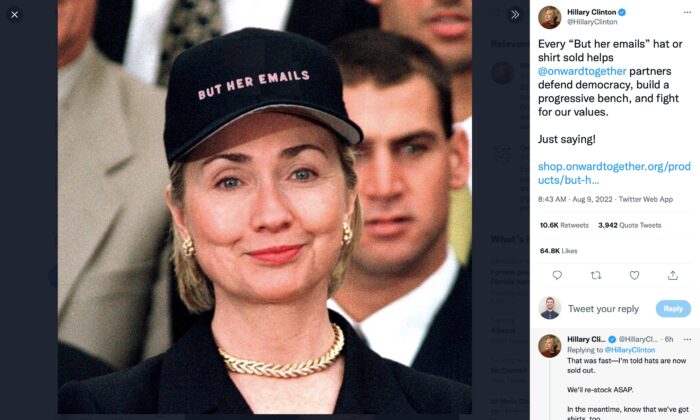 Hillary Clinton tweets a picture of herself in a "But Her Emails" hat just one day after the FBI raids former president Donald Trump's home for classified documents. Screenshot taken Aug. 9, 2022. (Jackson Elliott/The Epoch Times)
Viewpoints

Attorney General Merrick Garland justified the unprecedented FBI raid of the residence of a former president by saying: “The department does not take such a decision lightly. Where possible, it is standard practice to seek less intrusive means as an alternative to a search, and to narrowly scope any search that is undertaken.”

With the approval of former President Donald Trump and after a request by the Department of Justice, Magistrate Judge Bruce Reinhart, who approved the warrant, publicly released it, as well as the inventory of items removed. According to The Wall Street Journal, the FBI “removed 11 sets of classified documents, including some marked as top secret … and … took around 20 boxes of items, binders of photos, a handwritten note and the executive grant of clemency for Mr. Trump’s ally Roger Stone.”

The crimes the DOJ asserts include evidence of probable cause that Trump violated the part of the Espionage Act pertaining to classified information; removal of government records; and the destruction of records. Generally, disputes between a departing president as to what documents and materials can be removed and what should be returned are worked out between the president and the relevant government entities.

The problem is the appearance of a two-tiered system of justice, one pertaining to Trump and the other pertaining to laws or subpoenas allegedly violated by top Democratic officials like then-President Barack Obama’s Attorney General Eric Holder, who refused to comply with a congressional subpoena and became the only sitting AG to be found in criminal contempt of Congress; IRS official Lois Lerner, accused of withholding the granting of tax-exempt status to conservative charities and who refused to comply with a congressional subpoena; the treatment of Bill Clinton’s National Security Adviser Sandy Berger, who removed and destroyed documents from the National Archives in 2003; and Secretary of State Hillary Clinton for her alleged violation of the Espionage Act.

But does the relevant part of the Espionage Act require “intent”?

Political columnist and commentator Charles Krauthammer wrote: “This is baffling. Under the statute (18 U.S.C. section 793(f)), it’s a felony to mishandle classified information either intentionally or ‘through gross negligence.’ The evidence, as outlined by Comey, is overwhelming.”

Former Assistant U.S. Attorney Andrew McCarthy wrote: “The question is whether she knew classified info would end up on the server, and her set-up made that inevitable. … Clinton could’ve been prosecuted either for willfully mishandling classified info or for doing so through gross negligence.”

Peter van Buren, a 24-year veteran of the State Department, wrote: “While Comey maintains there was no intent or gross negligence by Clinton to violate the law, it is difficult to reconcile her actions and his statement. … The standards applied in the Clinton case are at variance with how classified information violations elsewhere in the government are handled.”

Harvard Professor Emeritus Alan Dershowitz wrote: “Berger was administratively fined, and Mrs. Clinton was rebuked by James Comey, then director of the Federal Bureau of Investigation, which might have cost her the 2016 election. But neither was subjected to broad search warrants or criminal prosecution.”

There is much we still don’t know about the underlying affidavit for the warrant and whether Trump broke laws in removing material from the White House. But given the treatment of top Democratic officials versus the treatment of Trump, did the FBI search of Mar-a-Lago meet what Garland called the “standard practice to seek less intrusive means as an alternative a search”?

At the very least, the optics look bad, really bad.