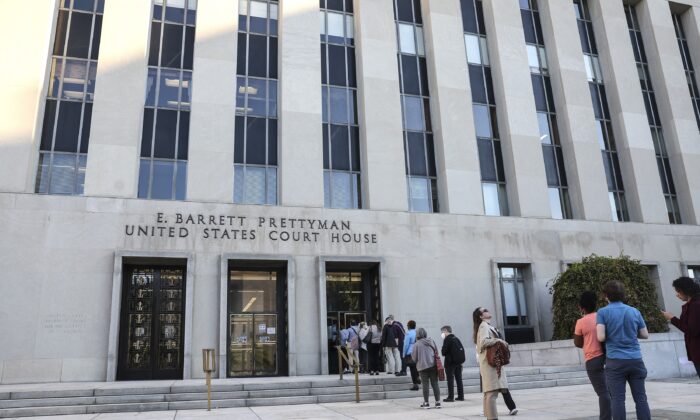 Potential jurors and other visitors wait outside the E. Barrett Prettyman U.S. Courthouse in Washington on Sept. 27, 2022. (Kevin Dietsch/Getty Images)
By Madalina Vasiliu

WASHINGTON—Many prospective jurors questioned on Sept. 27 and Sept. 28 for the Oath Keepers trial say they can be impartial despite having strong views on the Jan. 6, 2021, breach of the U.S. Capitol, former President Donald Trump, and gun control.

Several prospects called what happened on Jan. 6, 2021, an insurrection, a term used by many Democrats but criticized as inaccurate by most Republicans.

That included a U.S. government employee who said Trump led the “insurrection.” But the man said he could be impartial.

Another man, an attorney, said that he’s liked and shared social media posts opposing Trump and that so-called MAGA Republicans, or Trump supporters, include extremists. He said he’d try to put aside his views if picked for the jury.

A third man being considered said that he sees the breach as disruptive and “really unlawful.” But he said, “I think so,” when asked if he can put aside his feelings to weigh the evidence in the case, though he acknowledged it was hard to say.

Another prospective juror, a woman, said she has “strong feelings” about gun control, noting the Oath Keepers don’t face any gun charges. She also said she is disappointed by the protesters and rioters who breached the Capitol and were nearby on Jan. 6, 2021, but could overcome the prejudice. However, she said she didn’t know if she could put aside what she learned from news coverage and social media and disclosed that she doesn’t have a good impression of Trump supporters.

It’s “hard not to have feelings” since one sees coverage of Jan. 6, 2021, in many places, including on the television, a prospective male juror said.

“I’ve got to” put aside my views, a fifth man said. He recounted his son being in school on Jan. 6, 2021, and fearing for both his safety and his son’s safety. The man said he was open to hearing new views and perspectives on the Oath Keepers.

Oath Keepers founder Stewart Rhodes and others involved with the group are being tried on numerous charges, including seditious conspiracy.

Prosecutors say they conspired to breach the U.S. Capitol and disrupt the certification of electoral votes that was occurring there. Defense lawyers say their clients are innocent.

The Oath Keepers are a group of former and current members of the military and law enforcement, as well as first responders.

Jury selection is expected to last through most or all of the week.

Another prospective female juror said she views the Oath Keepers as “extreme” and “far-right.” She described having strong feelings about gun control and attending the Women’s March, a feminist protest that advocated for liberal positions and was explicitly against Trump, a Republican.

The woman said she might become emotional if she serves as a juror and sees video footage from Jan. 6, 2021.

A prospective male juror who worked for the Transportation Safety Administration said he attended a rally for George Floyd, the man killed in Minneapolis by police officers there, but believes he can put aside his feelings to be impartial.

Another woman who is being considered said that her friend attended Black Lives Matter protests but that her friend doesn’t have an effect on her. She watched news coverage of the Oath Keepers but doesn’t care if a defendant is a Trump supporter.

“I don’t live in a bubble, I listen to others to see if my perspective can change but so far hasn’t,” she said.