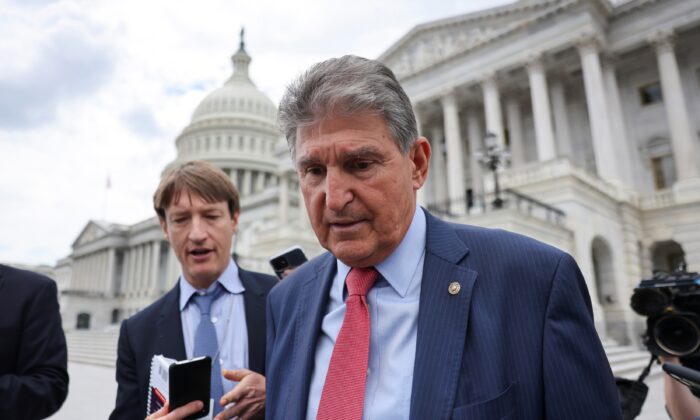 Sen. Joe Manchin (D-W.Va.) talks to reporters as he departs the U.S. Capitol after a vote in the Senate on Capitol Hill in Washington on June 10, 2021. (Evelyn Hockstein/Reuters)
Democrats

Senate Democrats have succeeded in convincing Sen. Joe Manchin (D-W.Va.) to vote to advance a broad election reform bill to a debate on the Senate floor.

Manchin said in a statement that he has been working for weeks to “eliminate the far reaching provisions” of S.1, also known as the For the People Act.

“I’ve found common ground with my Democratic colleagues on a new version of the bill that ensures our elections are fair, accessible, and secure,” he said. “Today I will vote ‘YES’ to move to debate this updated voting legislation as a substitute amendment to ensure every eligible voter is able to cast their ballot and participate in our great democracy.”

Senate Majority Leader Chuck Schumer (D-N.Y.) told reporters in Washington that he and Manchin reached an agreement during a meeting on Capitol Hill.

Senate Democrats want to pass S.1, a companion to a bill the House of Representatives approved in March. One Democrat sided with all Republicans against the bill at the time.

In the upper chamber, no Republicans have voiced support for the bill, which would federalize large parts of elections and weaken election security.

To advance the bill to a debate, Democrats would need 10 Republicans to join them in the 50-50 Senate.

Schumer said he made Manchin an offer in return for his support.

“I have committed to him if our Republican colleagues don’t obstruct and allow us to move forward on the debate, we’ll take up his proposed substitute amendment as the first amendment we’ll consider,” he said.

Manchin said the version he and other Democrats agreed on would expand voter access and includes voter identification requirements. It would also require the disclosure of any donors making contributions of $10,000 or more.

“These reasonable changes have moved the bill forward and to a place worthy of debate on the Senate floor,” Manchin said. “Unfortunately, my Republican colleagues refused to allow debate of this legislation despite the reasonable changes made to focus the bill on the core issues facing our democracy.”

Schumer planned to bring the motion up at 5:30 p.m.

Earlier Tuesday, Senate Minority Leader Mitch McConnell (R-Ky.) said on the floor that S. 1 is “a plan to rewrite the ground rules of American politics.”

“Today the senate’s going to fulfill our founding purpose, stop the partisan power grab and reject S. 1,” he added.