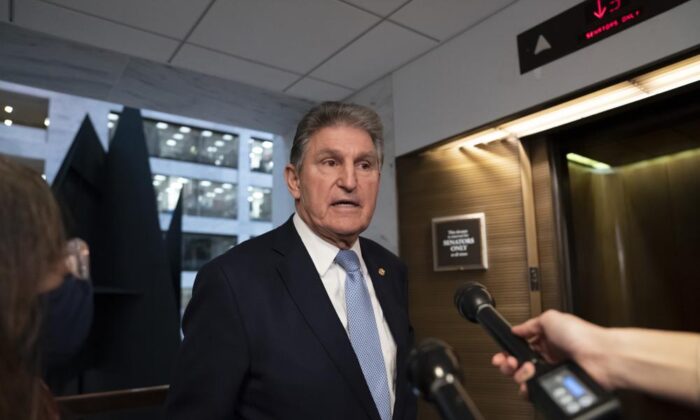 Biden’s proposal, called the Billionaire Minimum Income Tax, would place a minimum tax rate of 20 percent on America’s wealthiest households. The plan would go a step further than many other plans, however, to tax unrealized gains from stocks, bonds, and similar assets.

In short, the plan would tax the total net worth of billionaires before assets are actually sold and converted into cash.

The plan, Manchin said, would put taxes on “things you don’t have.”

“You might have it on paper,” Manchin said. “There are other ways for people to pay their fair share, and I think everyone should pay.”

Manchin was against President Donald Trump’s 2017 Tax Cuts and Jobs Act reconciliation bill, which he said weighted the tax system too heavily in favor of the wealthy.

On the other hand, Manchin opposed his party’s efforts to radically change the tax code in the now-defunct Build Back Better Act (BBB), which would have greatly increased the size and enforcement capacity of the IRS.

One plan in that bill would have let the IRS seize information from banks on all Americans’ accounts with more than $600 in activity annually, potentially allowing the IRS to seize the bank information of almost all American adults. Manchin openly criticized that proposal in October, and indicated that he wouldn’t support it as part of the BBB.

Still, Manchin has indicated that he would be in favor of a scaled-back version of the BBB, with a few key climate and social policies and a reworking of the tax code to return it to its pre-2017 norms.

But the West Virginia Democrat’s opposition to the White House proposal makes it unlikely to get off the ground in the evenly divided Senate, where, without any GOP support, all 50 Democrats must stand behind a bill for it to advance to the president’s desk under the reconciliation process.

“You can’t tax something that’s not earned—earned income is what we’re based on,” Manchin told reporters. “Unrealized gains is not the way to do it.”

“There is no question that in any way this topic comes up, the billionaires have something of immense value,” Wyden said.

Prior to the White House’s proposal, Wyden released his own plan to tax unrealized assets. Under the Wyden plan, the tax rate would sit at a substantially higher 23.8 percent. The White House’s slightly scaled-down plan would bring in less revenue, but was seen as more likely to win the support of swing voters such as Manchin and Sen. Kyrsten Sinema (D-Ariz.).

Since Manchin effectively killed the BBB in December, Democrats have worked behind the scenes to revive its key policy goals in a less wide-reaching reconciliation bill to win Manchin and Sinema’s support, but Manchin has made clear that he hasn’t been involved in these talks.

“No, no, no, no,” Manchin responded when asked if he had participated in these discussions. “It’s dead.”

However, Manchin’s support is a must-have for any reconciliation package, and his opposition to Biden’s proposal effectively leaves it dead on arrival unless Democrats can generate GOP support for the proposal.