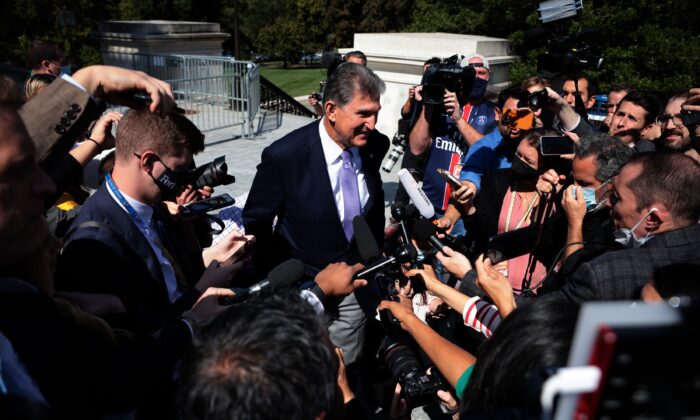 Sen. Joe Manchin (D-W.Va.) signaled on Oct. 6 that he won’t support carving out an exception to the filibuster for the federal debt limit, meaning Democrats don’t have enough votes to employ the so-called nuclear option.

“I’ve been very, very clear where I stand on the filibuster. I don’t have to repeat that. I think I’ve been very clear. Nothing’s changed,” Manchin told reporters in Washington.

Some Democrats want to nuke the filibuster to boost the debt ceiling because they’re refusing to use reconciliation to address it, and Republicans oppose their current plans on the limit.

President Joe Biden said late Oct. 5 that there’s a “real possibility” Democrats in the Senate will invoke the option, which would lower the voting threshold to a simple majority from 60.

But Democrats only hold 50 seats in the upper chamber, which means they can’t afford a single “no” vote from a Democrat. With Manchin’s newest comments, reinforcing his continued opposition to altering the filibuster, hopes of carving out an exception are doomed.

“A carve-out always depends on whether the votes are there,” Sen. Chris Van Hollen (D-Md.) told reporters shortly before Manchin spoke, adding that they should speak to Manchin and Sen. Kyrsten Sinema (D-Ariz.), who has also said she will not support changing or removing the filibuster.

The United States faces a recession if the debt ceiling isn’t raised or suspended by Oct. 18, Treasury Secretary Janet Yellen warned this week. Democrats are so far refusing to fold it into a budget package they hope to pass through reconciliation, which enables them to ram it through Congress with no Republican votes. Even if they turn to reconciliation, Republicans can jam up the process in the Senate. And with so-called progressive and moderate Democrats, including Manchin, at loggerheads on the package, there’s no guarantee that Democrats can whip up enough support for it.

The House of Representatives last week approved a bill that would suspend the debt limit until December 2022. The Senate was scheduled to hold a procedural vote on it on Oct. 6, but Republicans planned to filibuster it. Once the filibuster is entered, 60 votes would be needed to advance the legislation.

Few Republicans have indicated an openness to vote for the bill.

“Even now, while the Democratic leader complains that he’s short on time, he continues to waste time with partisan stunts that are dead on arrival. He scheduled yet another vote this afternoon, which he knows will fail,” Senate Minority Leader Mitch McConnell (R-Ky.) said on the Senate floor ahead of the vote.

“We’ve already presented Republicans with numerous opportunities to do what they say they want, including by offering a simple majority vote so Democrats can suspend the debt ceiling on our own, as Republicans have asked, but each time Republicans have chosen obstruction and kept us, unfortunately, on a path to default,” Schumer said.

Biden said after returning to Washington from Michigan that he planned to speak with McConnell, and Manchin urged McConnell and Schumer to work out some kind of agreement.

“I truly implore both leaders … to engage, start working, work this out,” Manchin said. “There should not be a crisis.”