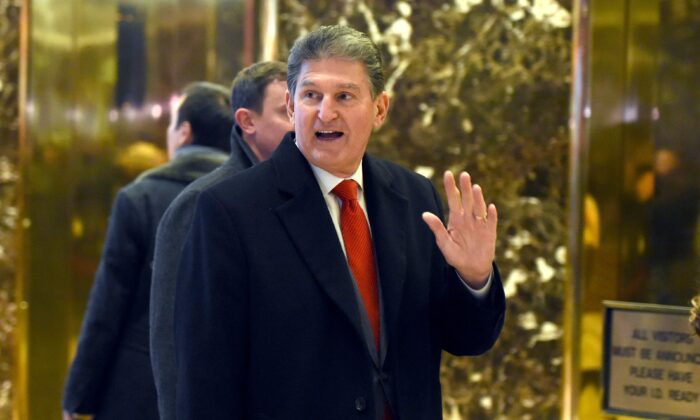 Sen. Joe Manchin (D-W.Va.) said on April 30 that he doesn’t support legislation that would make Washington, D.C., the nation’s 51st state, dealing a blow to the initiative, which Republicans have panned as an unconstitutional power grab.

Last month, the House passed H.R. 51—the Washington, D.C. Admission Act—in a vote of 216–208, backing congressional Democrats’ view of “no taxation without representation.” But Republicans see the legislation as an unconstitutional ploy to add two more Democratic senators.

The measure, which is backed by President Joe Biden, faces daunting odds in the evenly split Senate, as the legislative filibuster would require buy-in from at least 10 Republican senators, assuming all Democrats vote for it. Manchin’s declaration of opposition to the measure casts a further shadow of doubt on its fate.

Manchin said in the interview that he and his staff had taken a “deep dive” into the bill and its background, including a review of conclusions reached by the Department of Justice (DOJ) under previous administrations. He said prior analyses of the matter found that Washington statehood would require a constitutional amendment, adding that he views the 23rd Amendment of the U.S. Constitution as the main obstacle.

“Every legal scholar has told us that, so why not do it the right way and let the people vote to see if they want to change?” Manchin said, referring to a constitutional amendment.

While Manchin didn’t explicitly mention a repeal of the 23rd Amendment in the interview, H.R. 51 provides for expedited consideration of a joint resolution that would repeal the 23rd Amendment, which gave D.C. three Electoral College votes in presidential elections.

Delegate Eleanor Holmes Norton (D-D.C.), a former tenured professor of constitutional law who has long championed Washington statehood, issued a statement on April 30 insisting that making Washington into the 51st state wouldn’t require a repeal of the 23rd Amendment.

“Even though the 23rd Amendment does not need to be repealed before Washington statehood, some scholars have argued that the 23rd Amendment would be nullified under the Washington statehood bill, either because the bill would repeal the enabling statute for the amendment, or because the bill would lead to the unreasonable result of allowing the reduced federal district to participate in the Electoral College,” she said.

Norton said she expects Congress would quickly move to repeal the 23rd Amendment to prevent the reduced federal district from participating in the Electoral College.

The effort for Washington statehood, which would endow its citizens full representation in Congress and control over issues that affect the district, was started in 2013 by Sen. Tom Carper (D-Del.) and has been championed by Norton in the House.

Carper and fellow Democrats say it’s consistent with what the Founding Fathers envisioned for America and fair representation.

“This isn’t a Republican or Democratic issue; it’s an American issue because the lack of fair representation for Washington residents is clearly inconsistent with the values on which this country was founded,” Carper said in a statement in January.

In mid-March, prior to a hearing on H.R. 51, ranking member of the House Oversight and Reform Committee Rep. James Comer (R-Ky.) echoed Republican sentiment about the bill when he called it unconstitutional and a bid to tip the scales in Democrats’ favor.

“D.C. statehood is all about Speaker Pelosi and liberal democrats consolidating their power to enact radical policies nationwide like the Green New Deal, packing the Supreme Court, and eliminating the filibuster,” Comer said in a statement.

“The Democrats’ bill is unconstitutional and no amount of testimony can change that basic fact. The bill does not address the financial burden that would fall on the District if statehood was granted or other practical implications. H.R. 51 doesn’t rest in sound policy and is a dangerous political power grab that will ensure more government intrusion into Americans’ daily lives.”