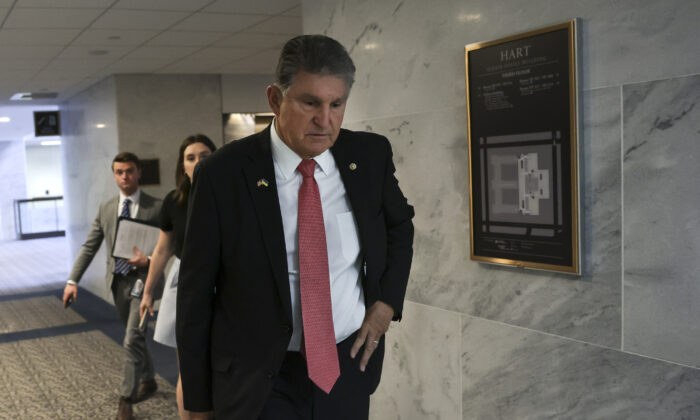 Sen. Joe Manchin (D-W.Va.) walks after a vote on the Women's Health Protection Act at the Hart Senate Office Building on May 11, 2022. (Kevin Dietsch/Getty Images)

Those who know the value of freedom most keenly are those who have lived under totalitarianism. When the Eastern Bloc nations were finally liberated, more than three decades ago now, it was no surprise that they sought capitalism like a man lost in the desert yearning for water. But what did astound many was the undiluted form of the free market policies they embraced.

Largely forgotten today is how faithfully Western European and American elites in politics, academe, and the media downplayed the threat posed and the persecution practiced by the Soviet empire. As CBS News Moscow correspondent Jonathan Sanders noted in a review of S.J. Taylor’s 1990 book Walter Duranty—The New York Times’s Man in Moscow, there were no true experts on Communist Russia, proven by “the abject failure of Kremlin watchers to foresee the emergence of Gorbachev as the Communist Party’s leader. But far more damning was the arrogance of constancy—the assumption that the social and political order was basically immutable. Many Kremlinologists missed the welling sentiment for radical reforms among the Gorbachev generation. Prominent observers of the Soviet scene even denied that the impulse for radical change existed.”

And yet, once freed, radicalism is exactly the direction in which so many ex-Iron Curtain citizens ran. As explained by Estonia’s then-ambassador to the United States Eerik Marmei when the country was honored by the non-partisan Tax Foundation for having the most competitive tax system in the world, “After Estonia regained independence in 1991, the country needed a tax system that was compatible both with the limited experience of the taxpayer who came from the Soviet communist controlled society and effective tax administration. It was essential that the tax system should support economic growth, not impede it.”

Estonia enacted a flat tax rate of 26 percent in 1992, which was then reduced to 20 percent, with reinvested corporate profits not subject to income tax, one of the simplest tax regimes in the world. “It is important to recognize that simple and clear rules of taxes create confidence among businesses, promote business expansion, capital investment, and most importantly, create jobs,” Marmei added. “One of the strengths of our tax system is its broad tax base which has enabled us to collect enough taxes, thus contributing to retaining the balanced budget and a low level of general government debt. Today, Estonia has the lowest general government external debt level in the European Union.”

Lithuania followed Estonia and adopted its own flat tax in 1994, then Latvia in 1995, the Russian Federation in 2001, the Slovak Republic and Ukraine in 2004, and Georgia and Romania in 2005. Romania set a 16 percent flat tax in 2005 and Albania a 10 percent flat tax in 2008 (later altered to two rates of 23 percent and 13 percent). Hong Kong’s long-established 16 percent flat rate on business and property tax income, a low ceiling of 17 percent on labor income, and no double taxation on individual or reinvested profits, as in the United States, obviously go far in explaining the island’s many decades of immense prosperity. And as Cato Institute economist Alan Reynolds has pointed out, “Even in the static sense, the U.S. does not have much revenue to show for income tax rates that are at least twice as high as they are in Hong Kong. Over time, there is no contest. Hong Kong’s tax receipts have increased three times as fast as those of Uncle Sam.”

Hong Kong’s position for more than a half century as the unlikely economic miracle of the Pacific has cemented its tax system in place, and even the political interference and persecution of individual rights by Communist China of recent years may not upend it. In the Soviet satellites, the need for swift transition eased adoption of something with the potency and simplicity of a flat tax. In the United States, unfortunately, a massive bureaucratic state and a large array of special interests have always made radical simplification, like the three-page, 1,010-word flat federal tax code proposed by presidential candidate Carly Fiorina in 2015, next to impossible.

The last major tax reform—far removed from a flat tax—was over 35 years ago and the deal we saw in the last week between Sen. Joe Manchin (D-W. Va.), and Senate Majority Leader Chuck Schumer (D-N.Y.) to impose a new 15 percent minimum tax on big companies, hammer private equity firms by closing a loophole that lets some of their earnings be taxed at the lower capital gains rate, and handing $80 billion to an already heavy-handed and politicized Internal Revenue Service is only the latest evidence that politicians can’t resist cluttering the tax code with new burdens every chance they get—even when we’re on the threshold of recession. Manchin and Schumer even have the audacity to call their new taxes and spending the “Inflation Reduction Act,” a claim that would make a snake oil peddler blush.

In the case of the United States, a low, flat tax rate regime that does not punish success by imposing a higher bracket on entrepreneurs who achieve their objectives and fulfill their dreams will only become a reality if it is enshrined in our Constitution. That would mean the difficult process of constitutional amendment–or an Article V constitutional convention of the states, as recently proposed by 2012 presidential candidate Rick Santorum. Either path will take collective political leadership that today seems far from materializing.