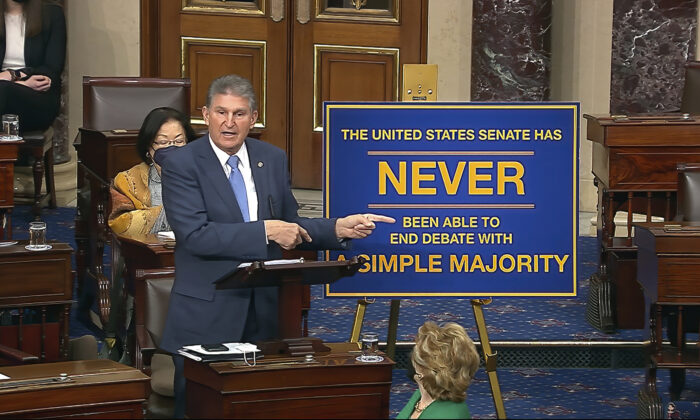 Sen. Joe Manchin (D-W.Va.) and Sen. Kyrsten Sinema (D-Ariz.) joined Republican senators on Jan. 19 to vote down an attempt by the Democrats to change the rules of the U.S. Senate in order to pass a major elections overhaul bill that was a top priority for President Joe Biden.

Manchin and Sinema have long said they would oppose the so-called “nuclear option” to change the Senate rules so that legislation can be passed with a simple majority.

The 52–48 vote likely marks the end of the push to pass the voting bill, which would have nationalized key aspects of how elections are conducted in the United States, including a provision that would have made voting by mail a permanent option in every state.

Biden traveled to Georgia earlier this month to drum up support for the legislation, though a path was never clear without a change to the Senate rules, which requires 60 votes to overcome a filibuster and pass a bill.

Democrats have considered the nuclear option for months in the face of a threat of a “scorched earth Senate” from Senate Minority Leader Mitch McConnell (R-Ky.), who vowed to respond to such a move by grinding the legislative session to a halt by employing all procedural means at Republicans’ disposal.

The rules change would have been limited to the voting bill, which is a combination of the Freedom to Vote Act and the John Lewis Voting Rights Act. Among other provisions, the Freedom to Vote act would loosen voter identification requirements in states that require voters to verify their identity to cast a ballot. Democrats claim the rule disadvantages minorities, while Republicans view such a provision as a keystone for election integrity.

“The Senate rightly decided to keep the legislative filibuster. It protects the voice of millions of Americans. It keeps our laws and republic steady. It defends those not in the majority. I am glad to have cast my vote in favor of the rules and against this Democrat power grab,” Sen. Mike Lee (R-Utah) wrote on Twitter.

Senate Majority Leader Chuck Schumer (D-N.Y.), who had made a final push with his own party before the vote, said he won’t give up trying to pass the bill.

“Senate Democrats won’t be deterred. With no support from the Senate GOP—many denying voter suppression even exists—we faced an uphill battle in this vote. But every Senator’s now on record. Americans see who’s for voting rights. It only strengthens our resolve to protect voting,” Schumer wrote on Twitter.