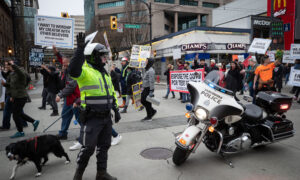 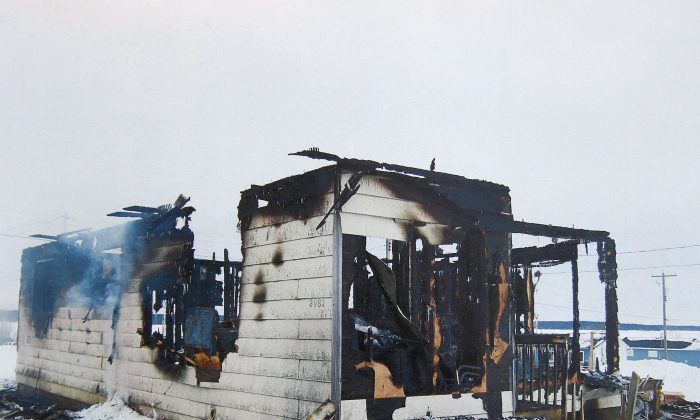 A burned-out house in St. Theresa Point First Nation, Manitoba, January 2011. A former band constable who rescued a toddler from a burning home on the reserve says he’s haunted by a baby he wasn’t able to save who perished in the fire. (The Canadian Press/HO, RCMP via Manitoba Law Courts)
Canada

WINNIPEG—A man who crawled through a window to rescue a toddler from a burning home on a remote Manitoba First Nation says he’s still haunted by the baby he wasn’t able to save.

Timothy Mason was testifying Dec. 17 at an inquest into the deaths of three children and an adult in house fires on two of the province’s northern reserves. He was a band constable, working across the street from the home, when fire broke out at St. Theresa Point in January 2011.

Mason said he ran toward the house and kicked in the front door, only to be driven back by billowing black smoke, intense heat and flames. On the front lawn, a woman was hysterical and screaming: “There are kids in there,” he recalled.

Mason found a window and managed to open it enough to crawl in. He held his breath, blinded by black smoke, and started feeling his way along the floor. On a bed, he found a toddler and grabbed her.

“I knew I was running out of breath,” Mason told the inquest. “My throat was starting to hurt. I just put the baby out the window until I felt someone grab her from my hands.”

Someone pulled him out through the window, too, and he lay on the snow, gasping for air.

“It was like someone was grabbing my throat. I couldn’t breathe. I don’t know how long I stayed there trying to catch my breath,” he said.

When he could manage it, he ran back to the window and opened it again. Flames shot out, catching the top of his head and his jacket.

The inquest has heard how neighbours tried to fight both blazes with buckets of water and low-pressure hoses. St. Theresa Point’s fire truck was broken, in a garage, with no fire hoses. No one knew where the keys were.

Mason said he never thought of the danger he was putting himself in at the time, but he has since then. Had he stayed in the house another minute, he would probably have passed out and become a victim himself, he said.

Although Mason was honoured for his heroism in rescuing the toddler, all he can think about is the baby he wasn’t able to save.

“It still haunts me when I hear a baby cry. I can never forget.”

Statistics show that residents of Manitoba First Nations are far more likely to die in house fires than people living off reserve, who are more likely to escape with injuries. Although fires on reserves make up less than five percent of all fires in Manitoba, they account for up to half the fatalities.

An internal report from Aboriginal Affairs and Northern Development Canada estimated it would take a $28-million injection in federal funding to cut down on the number of fatalities, but only a fraction of that amount has been approved.

Although St. Theresa Point now has a fire truck, the inquest heard it had to buy a used one which ate up the band’s entire $70,000 annual fire protection budget. Ivan Mason, emergency services officer for Island Lakes Tribal Council, said the First Nation is now on the hook for expensive maintenance costs.

“That leaves the community with nothing,” he said.

The inquest is expected to conclude Thursday with testimony from Manitoba’s fire commissioner.