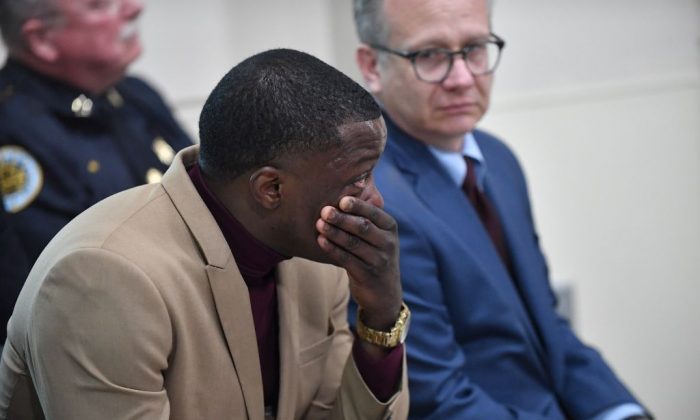 A 29-year-old man who disarmed a gunman during a deadly shooting spree inside a Nashville restaurant on Sunday declined accolades from police and others that he was a hero, saying he acted out of a desire “to live.”

James Shaw Jr., the father of a 4-year-old daughter, told a news conference flanked by Nashville Mayor David Briley and local and federal law enforcement officials that he was thinking simply of self-preservation when he wrestled the assault-style rifle away from the assailant during a rampage in which four people were killed.

“I’m not a hero, I’m just a regular person,” the Nashville native said, pausing as tears rolled down his cheeks. “I just wanted to live.”

Despite his humble recounting of the incident, police and others at the news conference stood and applauded him after his remarks.

“He is a hero in my books,” said Brennan McMurry, 28, a friend who was with him at the Waffle House when the gunman burst in before dawn, according to the Tennessean newspaper.

“The shots had stopped, so he decided to rush the gunman, actually wrestled that assault rifle away, tossed it over the counter and, at that point, the gunman fled,” he said.

Shaw, who said he works for AT&T, recalled how when he and McMurry were at the Waffle House when they heard a crash, which he initially thought was plates breaking.

He then saw the gunman, who was dressed in a green jacket and nothing else, open fire. When Shaw moved toward the bathroom, the shooter followed him, making him feel trapped.

“I distinctly remember thinking that he is going to have to work for this kill,” he said.

Shaw said that when he saw the gunman pause to reload, he saw his opportunity and snatched the gun, which he said was hot to the touch, and threw it away.

He sported a bandage over his right hand where he was burned grabbing the barrel.

“I didn’t care. It was life or death at that time,” Shaw said at the news conference, adding he went home afterward, got changed and went to church.

“I just wanted to live. I didn’t really fight that man to save everyone else,” he said. “I took the gun so I could get myself out. That may not be popular. But I’m honest to the core. … That was my thought in that moment.”