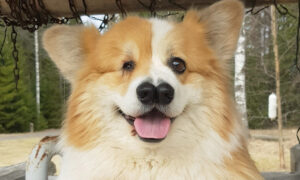 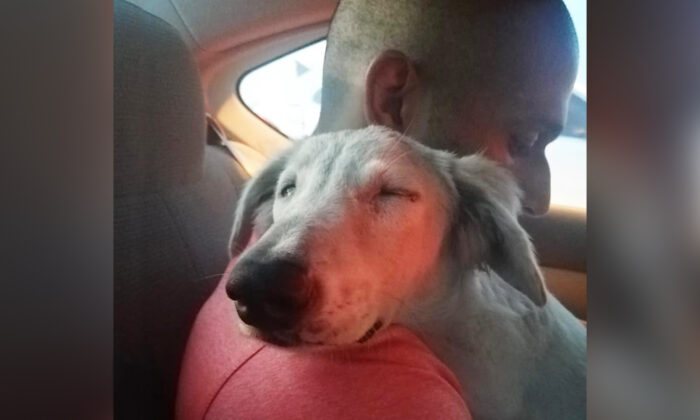 A chance interaction between a passerby in Dubai and an abandoned stray dog has led to an inseparable friendship.

While visiting his sister’s office on a scorching-hot day in 2018, stand-up comic Anand Raman spotted a dirt-covered dog eating scraps left by some of the workers under the shade of a car. Concerned for the dog’s welfare, Raman knelt down for a closer look.

Noticing that he had company, the dog left his shady spot to investigate.

“He approached me with a curious but excited disposition, wagging his tail excitedly,” Raman told The Dodo. “We then sat there for a while on the sidewalk and he was content just receiving pets from me.”

As Raman interacted with the stray, he noticed the dog’s unsteady walk and matted fur. He made an on-the-spot decision to take the dog to see a vet, with the help of his sister and brother-in-law.

“I carried him into the car, and he immediately fell asleep on my shoulder,” Raman recalled. “He was exhausted when I first got him, which is why he fell asleep right away in the car ride to the hospital.”

The dog was diagnosed with rickets in both of his front legs, a treatable weakening of the bones caused by malnutrition, but was otherwise healthy. The sweet stray had already won Raman’s heart, so Raman bundled the dog back into his car and took him home for a much-needed shower.

To Raman’s great surprise, the dog was pure white under the thick layer of dirt on his fur. Raman named him “Snowy,” and the former stray became an integral member of the family.

It took time, however, for Snowy to build trust. “Getting him adapted to a house at first wasn’t easy,” said Raman. “He wasn’t sure where to go and what to explore, so he’d just sit in a corner.”

Walking with Snowy was also a learning process. Nervous of being left back on the streets, Snowy would pull on his leash and run back to the parking lot of Raman’s apartment complex. This happened “for a while,” said Raman, before Snowy realized he had a safe home for life.

Two months after receiving the much-needed love and care, the cuddly dog has warmed up to Raman’s family, kids, guests, and even other dogs. “He sleeps and waits for us to get home from work, which is when he showers us with love and we reciprocate the same with him,” he shared.

Now, two years later, in order to celebrate Snowy’s recovery, the accidental dog dad shared a moving photo montage on Instagram, proving that his bond with Snowy is stronger than ever. “It’s been 2 years now since Snowy has become a part of our family, and it’s been pretty dope having him,” he wrote.