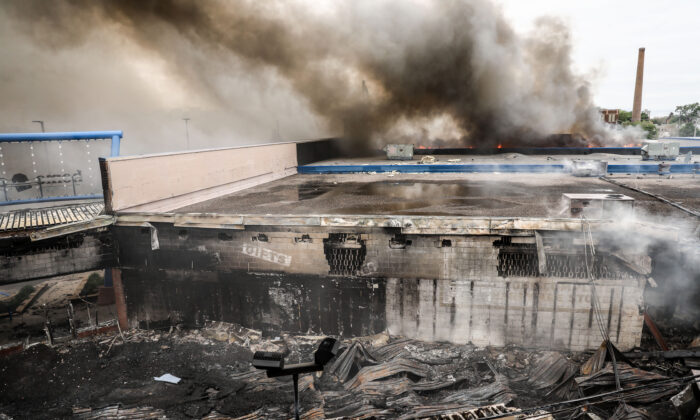 Buildings continue to burn in the aftermath of a night of protests and violence following the death of George Floyd, in Minneapolis, Minn., on May 29, 2020. (Charlotte Cuthbertson/The Epoch Times)
Crime and Incidents

A 29-year-old Illinois man was sentenced Tuesday to nearly nine years in federal prison for setting fire to a cell phone store in Minneapolis during the riots in 2020.

According to court documents, Rupert posted a video on his Facebook page showing him passing out explosives to others while encouraging people to hurl them at law enforcement officers during a riot in Minneapolis, Minnesota in late May 2020.

After lighting a Sprint store on fire, Rupert said, “I lit it on fire.” And before entering a nearby Office Depot, he stated, “I’m going in to get [expletives].”

The next day, Rupert traveled to Chicago and filmed himself looting there. Rupert was arrested in Chicago in the early morning of May 31.

Rupert’s girlfriend later told law enforcement that he traveled to Minneapolis to “riot.” He himself described his intention to go to Chicago to “riot this [expletive].”

“Matthew Rupert chose to drive more than 400 miles from his home in Illinois to Minnesota to engage in violence and destruction, all while broadcasting it for the world to see. Peaceful protest was not on his agenda,” said Anders Folk, acting U.S. attorney for the District of Minnesota, said in a statement. “Arson, looting, property damage, and the glorification of it, will not be tolerated. Today, justice has caught up with Mr. Rupert as he must now account for his crimes.”

Michael Paul, special agent in charge of the FBI’s Minneapolis field office, added: “Mr. Rupert made his way to Minneapolis for the express purpose of instigating lawless behavior on our local streets. He demonstrated no purpose other than endangering peaceful protests by actively encouraging violence against law enforcement and personally destroying community businesses.”

A lawyer representing Rupert did not respond to a request for comment.

Prosecutors said in a pre-sentencing document that Rupert carried a large duffel bag of artillery-shell fireworks with him to Minneapolis and noted that he has a lengthy criminal history.

In response, Rupert, through a lawyer, said that he brought fireworks with him and was not planning beforehand to commit a serious crime.

“Mr. Rupert takes responsibility for setting a fire, but such destruction was not part of any prior plan. Mr. Rupert like many others got caught up in the mob. It is not an excuse, but it is still a fact which accurately explains that he did not come to Minneapolis for the purpose of causing serious physical destruction,” the filing stated.

The sentencing is the latest stemming from riots that unfolded in Minneapolis after the killing of George Floyd in police custody there on Memorial Day in 2020.