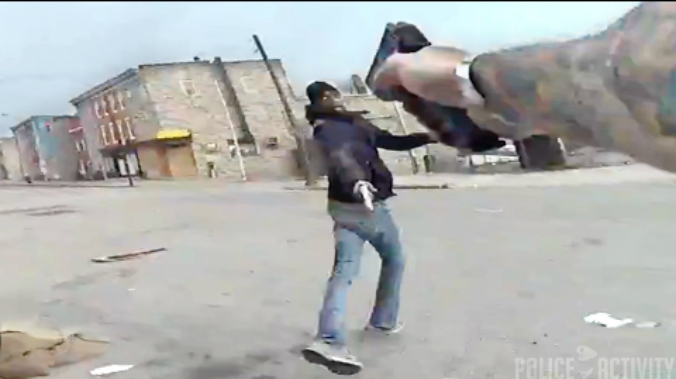 Man Killed by Baltimore Officer Had 3 Arrests This Year

BALTIMORE—A drug dealer who was arrested three times this year was fatally shot by a policeman when he pointed a handgun at the officer, authorities said Thursday.

Curtis Jamal Deal, 18, jumped out of a car Tuesday and officer David Kincaid ran after him, police said. Body camera footage released by police shows Kincaid, an officer of five years, shooting Deal in the middle of a West Baltimore street when Deal raised a silver handgun toward him. Deal, who was black, did not fire.

The officer’s race was not immediately released.

Deal was arrested on Jan. 4 for handgun possession, on Jan. 30 for heroin possession, and on Feb. 2 with another gun, more heroin and more than $6,000 in cash, authorities said. Deal was released Monday on $250,000 bond despite prosecutors’ request to keep him locked up until trial.

Deal was also a person of interest in a 2016 murder, authorities said.

Department spokesman T.J. Smith said Kincaid gave verbal commands to Deal prior to firing, but the bodycam did not record sound.

Police say Kincaid spotted a car “driving erratically” in an area designated as a high-crime zone, and decided to follow it, police said. Kincaid chose to chase Deal after he jumped out of the car because he recognized the man and saw a gun in his hand, police said. Prior to each of Deal’s previous arrests, he had run from officers.

It’s the first police shooting of 2017, and comes during a particularly violent period in Baltimore. So far this year, the city has seen 42 homicides in 40 days.

The city is in the midst of finalizing a consent agreement with the U.S. Department of Justice that would mandate sweeping reforms to the police department.