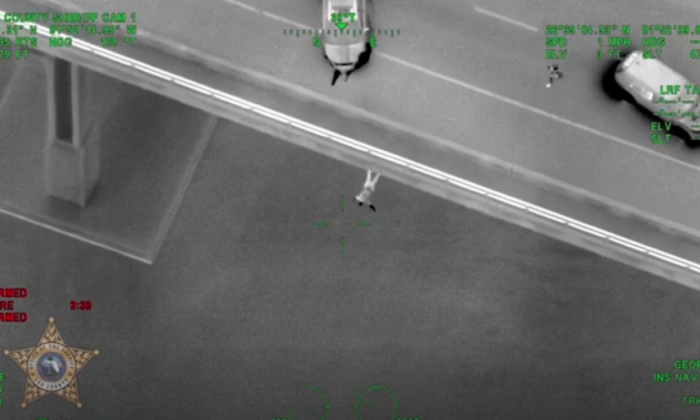 A police chase ended with a man jumping 55 feet down from a bridge into a river after the stolen van he was driving crushed against the safety barriers, officials said. The man was taken to a hospital and is facing car theft charges.

The Lee County Sheriff’s Office said officers first tried to stop a stolen van in Fort Myers, Florida, but the driver sped off toward a bridge. There, the van was seen swerving before crashing into a retaining barrier on one side at a fast speed that sent the van to the barrier on the other side.

As the van came to a stop, footage from a helicopter that had arrived at the scene caught a man getting out of the van and going over the safety barrier of the Edison Bridge. He appears to hesitate for three seconds looking at an officer that had just pulled over before diving into the Caloosahatchee River, about 55 feet down.

The man was taken to a local hospital to receive treatment, where he is detained on car theft and fleeing and eluding charges.