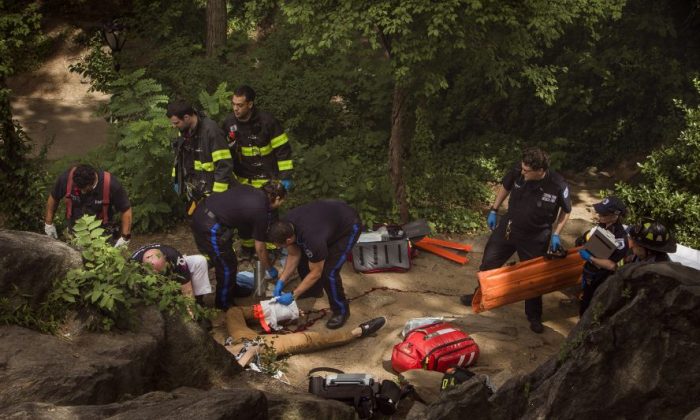 A man, center bottom, bleeds from his injured leg as he gets helped from paramedics, firemen, and police in Central Park in New York, Sunday, July 3, 2016. Police and emergency responders took the man on a stretcher from New Yorks Central Park after people near the area reported hearing some kind of explosion. Fire officials say it happened shortly before 11 a.m., inside the park at 68th Street and Fifth Avenue. Authorities say the man suffered serious injuries and was taken to the hospital. (AP Photo/Andres Kudacki)
Crime and Incidents

NEW YORK  — A 19-year-old man suffered a serious injury to his left foot in Central Park on Sunday, police said, and the man’s friends told authorities he stepped on something that exploded.

Authorities said the man was in the park at about 11 a.m. Police said witnesses told them the man had just stepped onto a rock when an explosion occurred. People in the area said an explosion was heard blocks away.

“It sounded like a cannon,” Sara Gordon told the Daily News. “I thought it was a Fourth of July thing.”

The Fire Department said the man sustained a major injury, possibly an amputation, and was taken to a hospital. There was no immediate word on his condition.

He “was severely injured. His left leg was severely damaged, all bone and muscle,” said John Murphy, visiting the city from Connecticut. He said he stayed at the scene with the man until emergency responders arrived.

The NYPD’s bomb squad and police were investigating the circumstances of the explosion. Mayor Bill de Blasio sent out a tweet reminding people to stay safe around fireworks.

“Fireworks are fun — but let’s leave them to the professionals,” the mayor tweeted.