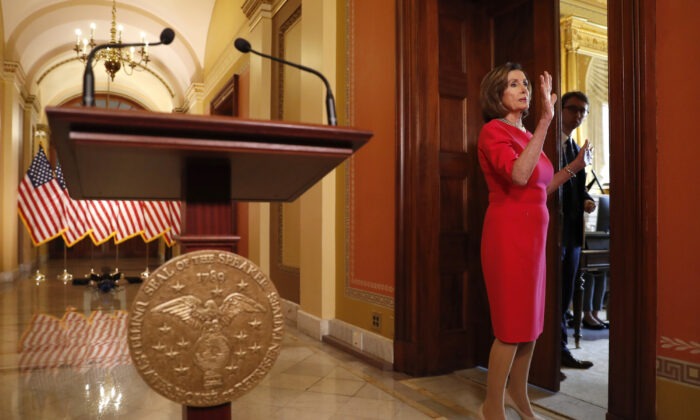 Florida man Adam Johnson, 36, has been arrested and incarcerated after entering the Capitol with Trump supporters on Jan. 6 and carrying the Speaker of the House’s lectern.

Johnson appears in a widely circulated photo carrying the Speaker’s podium, donning a “Trump” hat waving at the camera and smiling.

The photo was taken by Getty Images photographer Win McNamee.

According to The New York Post, he is a husband and father-of-five who had social media accounts that have now been taken down or deleted. He had made posts saying he was going to Washington ahead of the protests.

A statement by the Department of Justice reads:

“It is alleged that on Jan. 6, 2021, Johnson illegally entered the United States Capitol and removed the Speaker of the House’s lectern from where it had been stored on the House side of the Capitol building. A search of open sources led law enforcement to Johnson, who is allegedly seen in a widely circulated photo inside the Capitol carrying the lectern.”

Another two men were charged on Saturday.

Jacob Anthony Chansley, a.k.a. Jake Angeli, of Arizona, was charged with violent entry and disorderly conduct and arrested for breaking into the Capitol.

“It is alleged that Chansley was identified as the man seen in media coverage who entered the Capitol building dressed in horns, a bearskin headdress, red, white, and blue face paint, shirtless, and tan pants. This individual carried a spear, approximately 6 feet in length, with an American flag tied just below the blade,” reads the DOJ statement.

The other man indicted today is 35-year-old Derrick Evans, from West Virginia, he was taken into custody on Friday.

Rep. Matt Gaetz (R-Fla.) said on the House floor on Jan. 7 that some protestors who breached the Capitol were “members of the violent terrorist group Antifa” that were “masquerading as Trump supporters.”

Michael Sherwin, acting U.S. attorney for the District of Columbia, said in response to questions about group affiliations of protestors that participated in the storming of the Capitol, that:

“It looks like there may have been a loose affiliation, but it didn’t look like there was any specific ‘militia groups’ that planned or were affiliated with the persons that we specifically charged.”

“It’s only been in the first 24 hours in the investigation. So a lot could happen within the next several days,” he added.

In response to questions about Capitol Police opening the barricades and letting protestors in, Sherwin said that the federal prosecutors are “looking at all actors” involved.