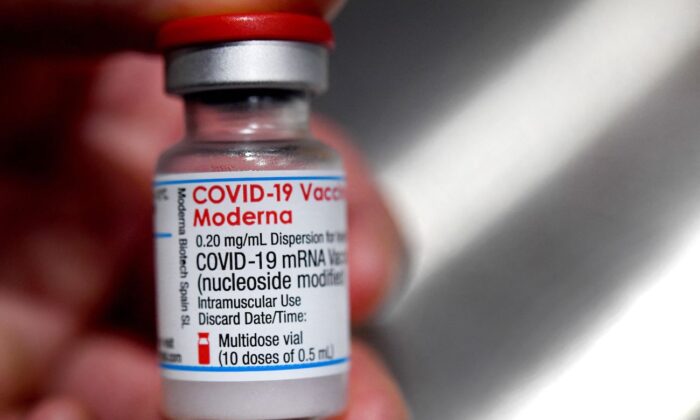 A man has died in Pittsburgh after receiving a second dose of the Moderna COVID-19 vaccine, and was determined to possibly have had a rare and severe blood clot condition called thrombosis with thrombocytopenia when he presented to the hospital, according to a report.

The case report of the 65-year-old man is detailed in a letter to the academic journal Annals of Internal Medicine published on June 29. The journal announced on Twitter that the research led by Dr. Swathi Sangli “is believed to be the first case of #thrombosis with thrombocytopenia after a messenger RNA #COVID19 vaccine.”

In the latest case study, the man, who had chronic hypertension and hyperlipidemia, died after blood clots formed in his lungs, legs, and then ultimately his brain, after having taken the mRNA-based Moderna vaccine, health care professionals at the Allegheny Health Network in Pittsburgh wrote in their case report.

The man had presented to the hospital with one week of discomfort in both his legs, intermittent headaches, and two days of shortness of breath. According to the report, the symptoms started 10 days after he received a second dose of the Moderna vaccine. He died 12 days after arriving at the hospital.

The condition is similar to heparin-induced thrombocytopenia (HIT), but the man had no known heparin exposure before presenting to the hospital. However, the authors acknowledged that they “cannot rule out atypical HIT or HIT with unrecorded heparin administration” in this case.

The report “complicates hypotheses that implicate adenoviral vectors as the sole cause of VITT or TTS,” the authors wrote. The COVID-19 vaccines that are based on deactivated adenovirus include the AstraZeneca and the Johnson & Johnson (J&J) vaccines, which have previously seen reported cases of thrombosis with thrombocytopenia after inoculation.

The authors said they were unable to identify other causes for the man’s condition, including COVID-19, other infections, immune thrombocytopenia, or another rare blood disease called thrombotic thrombocytopenic purpura (TTP).

“Had we suspected VITT or TTS earlier, we would have treated the patient differently,” they wrote.

According to the American Society of Hematology, heparin should be avoided “until TTS has been ruled out or until an alternative other plausible diagnosis has been made.”

During the man’s stay at the hospital, he was—among other treatments—given unfractionated heparin, which helps stop new blood clots from forming. But three days later, he developed an acute hematoma in his gluteal muscles that required doctors to withdraw the heparin.

Twelve hours later, the man developed acute encephalopathy, and a CT scan showed cerebral venous sinus thrombosis (CVST)—a clot in the brain that prevents blood from draining out of it. This time, doctors started treating the patient with bivalirudin, a non-heparin therapy that prevents blot clots, and started a procedure called plasmapheresis, but the man continued to deteriorate and ultimately died.

Within 24 hours of the man having started the new anticoagulant therapy, blood tests showed he had methicillin-sensitive Staphylococcus aureus, and antibiotics were given.

Of the man’s overall case, the authors said that “such a rare event, even if confirmed by additional reports, should not prevent” people from taking COVID-19 vaccines that use mRNA technology, and that it was “important to note that many millions of people” have received such vaccines. In addition to the Moderna vaccine, the Pfizer-BioNTech vaccine for COVID-19 also uses mRNA technology. No such rare blood clot has yet been recorded after administration with the Pfizer vaccine.

In an accompanying editorial, two outside physicians, Allyson Pishko and Adam Cuker, wrote that they “are in full agreement with the authors’ decision to treat the described case as VITT and do not advocate delaying treatment in such cases.”

“However, extra caution is needed before attributing the patient’s presentation to the mRNA-1273 vaccine [Moderna vaccine].”

The two pointed out that rare cases of “spontaneous HIT” have been reported, most frequently after orthopedic surgery, but also in patients in association with infection. They pointed out that the 65-year-old man had a staph infection detected in his blood test about one week after he presented to the hospital and the study authors couldn’t confirm whether the patient had any infections before he was admitted.

“Had this infection been present on admission, it would be impossible to discern VITT from spontaneous HIT triggered by infection,” they wrote.

The two acknowledged that the seriousness of VITT “should not be downplayed” but its risks “must be interpreted in the context of the overall morbidity and mortality of COVID-19,” the disease caused by the CCP (Chinese Communist Party) virus. They cited a recent analysis that reported that CVST, which is a “characteristic and highly feared manifestation of VITT” was seen more frequently in patients hospitalized with COVID-19 (207.1 per million) than after vaccination with an adenovirus-based COVID-19 vaccine (0.9 to 3.6 per million).

While it’s “difficult to establish a link” between one deadly blood clot event and the Moderna vaccine, they said clinicians “should be vigilant for VITT” going forward.

In April, the Food and Drug Administration and the Centers for Disease Control and Prevention recommended a pause in the J&J vaccine amid several reports of blood clots. The two health bodies later that month advised that administration of the vaccine could resume, but attached warnings to their recommendations, including advice about possible risks. The CDC in May reported more than two dozen cases of thrombosis with thrombocytopenia.