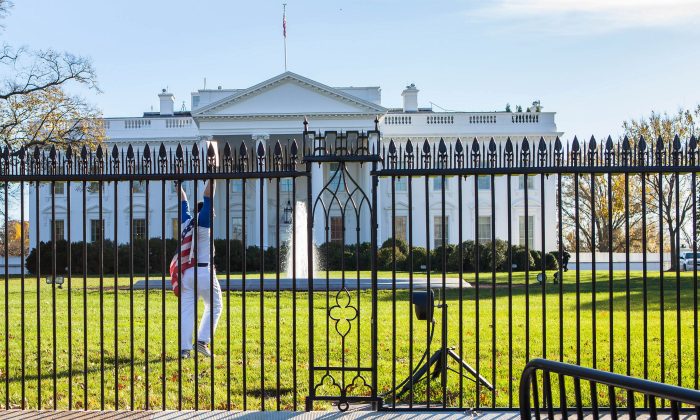 In this photo provided by Vanessa Pena, a man gestures after jumping a fence at the White House on Thursday, Nov. 26, 2015, in Washington. The man was immediately apprehended and taken into custody pending criminal charges, the Secret Service said. President Barack Obama and his wife and daughters were spending Thanksgiving the holiday at the White House. (Vanessa Pena via AP) MANDATORY CREDIT
US

WASHINGTON  — The Secret Service says a man who jumped the White House fence draped in an American flag on Thanksgiving has been charged.

Secret Service spokesman Robert Hoback says 22-year-old Joseph Caputo of Stamford, Connecticut, scaled the north fence on Thursday afternoon and gained access to the north grounds, but was immediately arrested. Hoback said in an email Friday that Caputo was charged with unlawful entry.

The intrusion prompted a lockdown as the first family celebrated Thanksgiving.

Victoria Pena of Houston, a witness, says the man was standing with other people visiting the White Housecompound when he rushed toward the fence carrying what appeared to be a binder. She says he then lay on the grass awaiting security personnel and guard dogs.

WASHINGTON — A man draped in an American flag climbed over the fence at the White House on Thursday, prompting a lockdown as the first family celebrated Thanksgiving.

The man was immediately apprehended and taken into custody pending criminal charges, the Secret Servicesaid in a statement. The incident took place about 2:45 p.m. EST.

An image of a man atop a section of fence in front of the North Lawn was posted on the website of television station WJLA. Another image showed the man standing on the lawn with his arms raised in victory.

A witness to the incident, Victoria Pena of Houston, said the man was standing with other people visiting theWhite House compound when he rushed toward the fence carrying what appeared to be a binder.

“I just heard him take a big, deep breath and whisper to himself, ‘All right, let’s do this’ and he took off,” Pena said. “It was chaotic. Everyone around us was yelling and kids were crying. It was pretty unexpected.”

Security personnel and guard dogs ran toward the man and he lay on the grass awaiting them, Pena said.

The north and south fence lines at the White House were temporarily closed, Secret Service spokesman Robert Hoback said. In the hours after the incident, numerous armed security personnel were seen along the streets and sidewalks outside the executive mansion.

President Barack Obama and his wife and daughters were spending the holiday at the White House.

In May, the Secret Service added a second layer of steel spikes to the top of the fence following an incident the previous month in which a California man scaled the fence and got onto the lawn. Other long-term security enhancements were under consideration in response to a September 2014 security breach in which a Texas man managed to scale the fence, enter the executive mansion and run deep into the building.