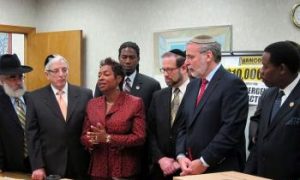 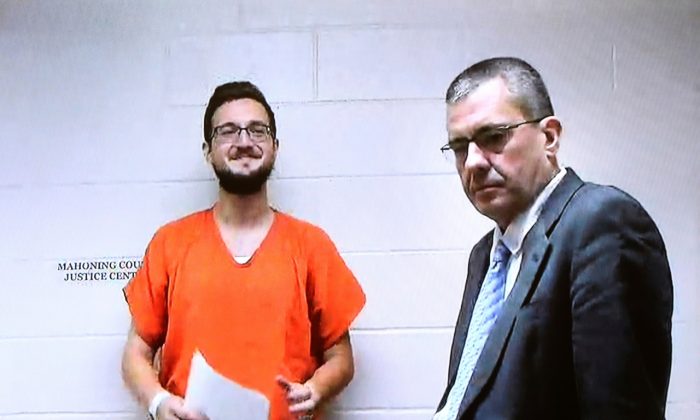 James Reardon, of New Middletown, Ohio, stands with attorney Walter Richie at the jail, seen on the video arraignment for Reardon at Struthers Municipal Court in Struthers, Ohio, on Aug. 19, 2019. (Robert K. Yosay/The Vindicator via AP)
US News

STRUTHERS, Ohio—A 20-year-old man pleaded not guilty on Aug. 19 to threatening a Jewish community center in a video that authorities say showed him shooting a semi-automatic rifle.

A judge near Youngstown set bond at $250,000 for James Reardon, ordered a mental health evaluation and told him to stay away from Jewish houses of worship and organizations if he is released from jail.

Police arrested Reardon Saturday on charges of telecommunications harassment and aggravated menacing, a day after a Jewish organization contacted authorities.

Ammunition, semi-automatic weapons, a gas mask and anti-Semitic information were found at a house in New Middleton where he lives with his mother, police said.

The post tagged the Jewish Community Center of Youngstown.

The Youngstown Area Jewish Federation said it found out about the threat on Friday and alerted the police and FBI. The organization said it later learned that “ira_seamus” was an online pseudonym for James Reardon.

“I want to stress that we know of no other threat to the Jewish Community or to any of our agencies at this point it time,” said Andy Lipkin, the federation’s executive vice president. “”Nonetheless, I have directed that we maintain the additional level of security for the near future.”

Reardon was arraigned by video in Struthers Municipal Court.

A message seeking comment was left with his attorney. There was no answer at a phone number for his mother, and a man who answered a number listed for his father hung up.

Media outlets in Youngstown reported that Reardon was at the 2017 ‘Unite the Right’ rally in Charlottesville, Virginia, attended by conservative groups, white supremacists, and Antifa counterprotesters, which turned violent.