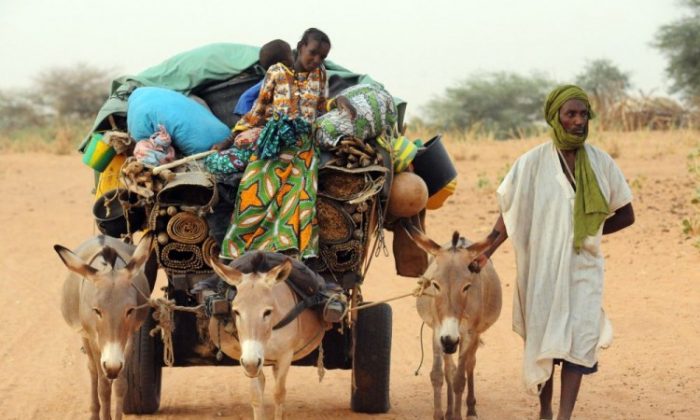 Ali Al Hassan, a Malian refugee, arrives with family members to the M'bere refugee camp near Bassiknou on May 2. More than 320,000 people have fled their homes in Mali since fighting began in mid-January, with more than half seeking refuge in neighboring countries. (Abdelhak Senna/AFP/GettyImages)
Africa

The once peaceful Mali, thought of as a showpiece of African democracy, has unraveled in recent weeks and now finds itself ensnarled in two civil wars with no obvious way out.

The first is the result of the March 22 coup. In the capital, Bamako, in the southwest, loyalists of ousted President Amadou Toumani Toure are fighting back against forces of the military junta.

The north, meanwhile, is being torn apart by bloody clashes between separatist Tuareg rebels, armed radical Islamist groups, and Arab militia. Coup leaders cited the president’s poor handling of the Tuareg situation as a main reason for seizing power, yet since March 22 the situation has grown far worse.

The two wars are tightly intertwined. Observers say the crisis in the north can’t be resolved until constitutional order is restored in the capital. But peace talks sponsored by the Economic Community of West African States (ECOWAS) have been repeatedly delayed by the junta.

“Without a solution that stabilizes the political situation and puts institutions back in working order, it is hard to see how the north can see any relief. At this stage, there is a great deal of confusion and uncertainty,” commented Malian writer Mohomodou Houssouba, in an email from Switzerland.

Mali is an electoral democracy that has ranked highly in political rights and civil liberties since 1993. It is one of the few African countries rated as “Free” in Freedom House’s 2011 country ranking.

Despite Mali’s relative stability, the situation in the north had all the ingredients for disaster. Since Malian independence in 1960, the north has complained that it is treated unfairly by the central government compared to other regions, that it is shut out of politics and denied access to resources.

“I worry for Mali. It is a like a Pandora box that nobody should have ever opened,” says Julie Owono, Global Voices Online sub Saharan Africa author.

Owono says this is a common phenomenon in West Africa, and is the main reason for claims of autonomy by the nomadic Tuaregs and the intrusion of radical Islamist and terrorist groups in Mali’s north.

“We have a time bomb in a territorial space as large as the European Union today with guerilla movements and people who fear the worst if solutions of pacification are not quickly found,” Owono says.

She blames a weak state for the current problems. “If the state is there, there will be no reason that radical Islam or independence demands are spread.”

The majority of population of Mali’s highly ethnically diverse population is concentrated in the south, including Bamako. Only 10 percent of the population lives in the north.

Among the ethnic groups in the north are Arabs, Fulani, Soghkay, Moor, and Tuaregs who account for not more than 10-20 percent of the region’s population. Despite their low numbers, the Tuaregs’ rebel arm, the National Movement for the Liberation of Azawad (MNLA) has claimed autonomy four times since Mali’s independence.

Some MNLA soldiers fought in the civil war in Libya in 2011 and returned home with new skills and weapons. Their rebellion broke out on Jan. 17, and by April 6 they had unilaterally declared independence of the Azawad State. Since then, the MNLA has taken over northern the cities of Gao, Kidal, and the UNESCO heritage site of Timbuktu.

Nonetheless, many experts say that the Tuaregs aren’t really after autonomy; they want their grievances to be addressed. They want infrastructural development and access to natural resources; and they want their nomadic heritage to be recognized, not subjected to cultural assimilation.

The Tuaregs have also been victims for years of organizations preying on their political weakness and poor quality of life to involve them in drug and weapons trafficking.

The Tuaregs are the ancient inhabitants of North Africa. Ethnically they are Berbers, not Arabs. The Berbers were displaced by the Arab invasions of North Africa starting in A.D. 6th century, and accelerated by the Hilalian invasions in the 11th century B.C. They took refuge in the Kabyle, Aures, and Atlas mountains in Algeria and Morocco where Berber populations are still dominant today, and in the Sahara Desert, where Berber populations probably already existed.

“These resident and immigrant Berbers in the Sahara became the Tuaregs we know today,” wrote Jeremy Swift, expert in nomadic pastoralism in Africa, Middle East, and Central Asia, via email from Wales.

Culturally Tuaregs, who call themselves “Kel Tamasheq,” are distinct from North African Arabs: They speak a separate language, and in their social order, women can wield considerable influence. Tuareg men wear face veils; women do not. Tuaregs are now Muslims but most resist fundamentalism. Typically, they dwell in the desert in dark leather tents. Historically, they are the people who accompanied the caravans across the desert.

Tuaregs live in at least seven countries: Mali, Niger, Mauritania, Morocco, Algeria, Libya, and Burkina Faso, with a fluid distribution. When the French colonialists came to North Africa in the late 19th century, they found the Tuaregs distributed widely over the Azawad region, but soon halted large-scale movement and froze the map.

The Tuareg’s claim of statehood covers about 60 percent of Malian territory, making the prospect of independence an unlikely project. For one thing, the African Union has a fundamental principle in its charter of respecting the integrity of the state borders.

“Real independence of Azawad will require mobilizing all Malian ethnic groups against Malian government, and all Tuaregs outside Mali. This is impossible,” says Manthia Diawara, Malian professor of literature at New York University.

Moreover, the Tuaregs are by definition nomadic, and nomads do not have a concept of borders.

Lastly, Tuaregs’ associations with radical Islamist groups like Ansar Dine, AQIM, and others, may compromise the legitimacy of their claims in front of the international community.

Human rights violations by Tuareg rebels and Islamist armed groups, amounting to war crimes, have been widespread since the insurgency began, according to a recent Human Rights Watch report. The list of atrocities includes rape, using child soldiers, pillaging hospitals and schools, public floggings, and executions. According to the U.S. State Department, 320,000 people have been displaced since the rebellion began.

When Capt. Amadou Haya Sanogo staged his coup on March 22— citing corruption and the poor handling of the Tuareg insurrection—the news immediately precipitated the defeat of the army in the north at the hands of the MNLA.

The coup itself made little sense since President Toure was not running for re-election in the vote slated for April 29. Toure resigned from office on April 8 as part of an ECOWAS-brokered deal, in which the junta promised to hand over power to a civilian government.

“This is the most ridiculous coup you could ever see,” says professor Diawara.

The real reason for the coup was a power struggle, says Diawara. The coup was backed by a bloc of Marxist-Leninist politicians who knew they’d lose the elections so decided to take power another way.

Diawara, who is in daily contact with family and friends in Bamako, says they tell him that most people there don’t care what is happening in the far north. For them the biggest issue facing Mali is poverty and they are frustrated that the junta is only interested in power, not the people.