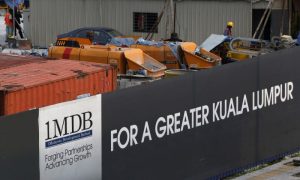 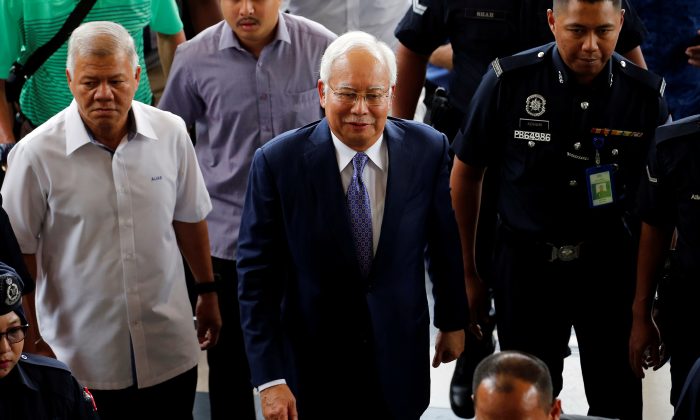 KUALA LUMPUR—Ten years to the day after he was first sworn in as Malaysia’s prime minister, Najib Razak stood trial on April 3 for corruption charges linked to a multibillion-dollar scandal that brought down his government.

Najib, in dark blue suit and matching tie, sat in the dock for nearly three hours before proceedings were adjourned until April 15, in the first of many trials he faces over graft accusations at state fund 1MDB.

It was a stunning fall from grace for a leader who just a year ago was Malaysia’s most powerful person, described by the attorney general on April 3 as wielding “near absolute power” in office.

“The accused is not above the law and his prosecution and this trial should serve as precedents,” Tommy Thomas said in an opening statement.

It is rare for the attorney general to lead the prosecution, and his presence signals the importance the government of Prime Minister Mahathir Mohamad attaches to the trial.

Malaysians voted Najib out of power in May 2018, as disgust grew over corruption and rising living costs and the investigations of 1Malaysia Development Berhad are seen as a test of Mahathir’s promises to root out corruption.

Najib faces seven charges: three counts each of criminal breach of trust and money laundering, and one count of abuse of power. They relate to suspected transfers totaling 42 million ringgit ($10.3 million) to his bank account from SRC International, a former 1MDB unit.

Najib has pleaded not guilty to the charges over the transfers, which involve a fraction of the $1 billion investigators say made its way into his accounts.

After the adjournment, Najib left the courthouse smiling, flanked by a score of his supporters chanting “Allahu akbar”, or “God is greatest”, but he did not speak to reporters.

1MDB, founded by Najib in 2009, is the subject of corruption and money laundering investigations in at least six countries. The U.S. Department of Justice has said about $4.5 billion was misappropriated from the fund.

Najib was barred from leaving Malaysia and arrested within two months after the election. He faces a total of 42 criminal charges, most linked to 1MDB and other state entities.

He has consistently denied wrongdoing and says the charges against him are politically motivated.

The luxurious lifestyle of Najib and his family also came to light with the discovery of nearly $300 million worth of goods and cash at properties linked to him.

Najib’s wife Rosmah Mansor, known for her designer handbags and jewelry, has also been charged with corruption. She has pleaded not guilty.

Thomas said prosecution evidence would establish that Najib’s credit card was charged with expenses of $130,625 at a Chanel store in Honolulu.

The trial had been delayed from February after appeals by Najib’s lawyers, who asked the highest court on April 1 to review its decision to lift a stay. That review will be heard on April 4.