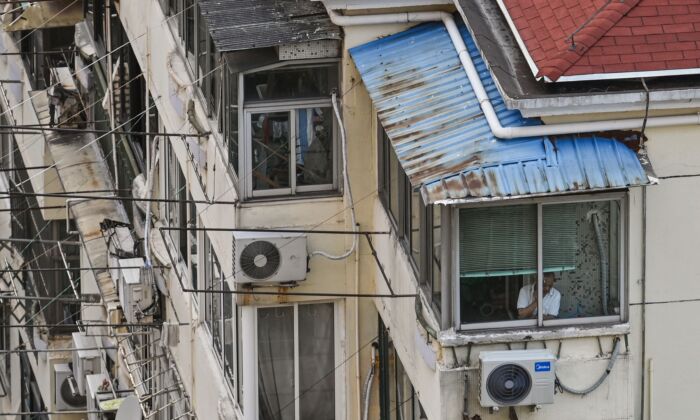 A man looks outside from his window during a COVID-19 lockdown in the Jing'an district in Shanghai on April 12, 2022. (Hector Retamal/AFP via Getty Images)
CCP Virus

Majority of Shanghai Residents Still Locked in Despite Shutdown Easing

BEIJING—Shanghai has eased a two-week-old shutdown on April 12, but at least 15 million residents are still being locked in their homes.

About 6.6 million people can exit their homes, but some must stay in their own neighborhoods, the state-backed news outlet The Paper reported, citing city officials. The city authorities only allowed some markets and pharmacies to reopen.

The abrupt closure of most businesses starting March 28 and orders to stay home left the public fuming about lack of access to food and medicine. People who test positive for the coronavirus are forced into sprawling temporary quarantine facilities criticized by some as crowded and unsanitary.

As the restrictions dragged on, the American government announced all “non-emergency U.S. government employees” would be withdrawn from its Shanghai Consulate.

Also Tuesday, the authorities of Guangzhou, a manufacturing and trading center northwest of Hong Kong, announced a new round of virus testing for its 19 million people. Most access to the city was stopped after 27 infections were found Monday.

The unusual severity of Shanghai’s shutdown appeared to be driven as much by politics as by public health concerns.

The struggle in the country’s richest city is an embarrassment during a politically sensitive year when Chinese leader Xi Jinping is expected to try to break with tradition and award himself a third five-year term as leader of the Chinese Communist Party (CCP).

The CCP is enforcing a “zero-tolerance” strategy aimed at isolating every case. Some officials have been fired for failing to act aggressively enough, which puts pressure on others to impose extreme measures.

In Shanghai, more than 200,000 cases but no deaths have been reported in the latest wave of infections.

The actual number of COVID-19 cases may be much higher. The number of infections is difficult to verify, as the Chinese regime routinely suppresses or alters information.

The city authorities eased restrictions by announcing residents of areas with no cases for at least two weeks can leave their homes starting Tuesday. It said they could go to other areas that also had no new cases during that time but were urged to stay home when possible.

Such “prevention areas” have about 4.8 million people, The Paper reported, citing city officials. It said all but 500,000 of those were in less crowded suburbs.

An additional 1.8 million people in “control areas” with no new cases in the past week are allowed out but can’t leave their neighborhoods, the report said.

Another 15 million people in “quarantine areas” that have had infections in the past week are still barred from leaving their homes. The report gave no indication of the status of the remaining 3.4 million people in the official 25 million population.

The shutdown of Shanghai, home of the world’s busiest port and China’s main stock exchange, has prompted fears manufacturing and global trade might be disrupted.

Automakers in Shanghai, a manufacturing center, have suspended or reduced production due to interruptions in supplies of components. The port’s management says operations are normal, but European Union Chamber of Commerce in China has estimated the volume of cargo it handles every day has fallen 40 percent.

Residents complained the shutdown left them without access to food or medicine and unable to look after elderly relatives who lived alone.

A video that circulated online Saturday showed what a caption said were people in the Songjiang district breaking into a supermarket and carrying away cartons of food.

Police denied the event occurred in Shanghai. A police statement Tuesday said the video was posted by a man in Kunshan, west of Shanghai, but not when or where it was shot. It said the man received unspecified “administrative penalties” for “disrupting public order by fabricated facts.”

The Associated Press was unable to find the source of the video or when and where it was shot.

Official plans in late March called for suspending access to districts of Shanghai for four days at a time while residents were tested. After case numbers soared, that changed to an indefinite citywide shutdown with only a few hours’ notice.

Despite a promise by city officials to improve food supplies, residents said online grocers often sold out early in the day or were unable to deliver. Vendors said they added hundreds of employees to speed deliveries.

The State Department last week advised Americans against travel to China due to “arbitrary enforcement” of laws and anti-virus restrictions. It cited a risk of “parents and children being separated.”

On Tuesday, a State Department statement said the U.S. government decided “it is best for our employees and their families to be reduced in number” due to “changing circumstances on the ground.”