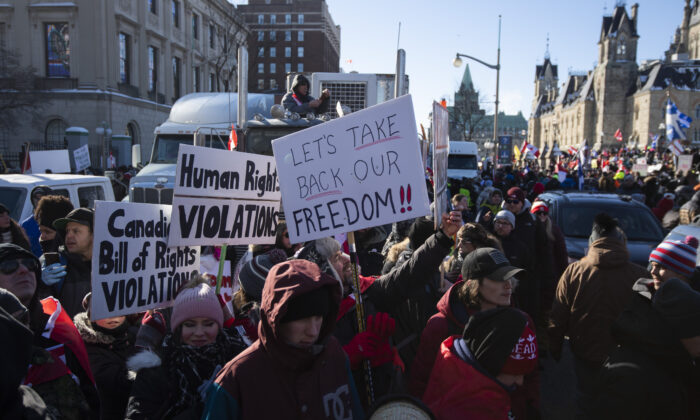 People participate in a rally against COVID-19 restrictions on Parliament Hill, a demonstration that began as a cross-country convoy protesting a federal vaccine mandate for truckers, in Ottawa on Jan. 29, 2022. (Justin Tang/The Canadian Press)
By Isaac Teo

A majority of Canadians say it’s time to end all COVID-19 restrictions and allow people to manage their own level of risk, a new Angus Reid poll shows.

The survey, published on Jan. 31, found that 54 percent of Canadians are in favour of ending the pandemic restrictions—an increase of nearly 15 percentage points from the results of a similar poll conducted in January two weeks earlier, which showed 40 percent in favour.

“With Omicron now appearing to have peaked, many Canadians are leaning toward reducing restrictions related to COVID-19 control in Canada,” Angus Reid said in a press release.

These sentiments are shared nearly all across the country, with a majority—at least 51 percent—in every region other than Atlantic Canada agreeing with the statement “It’s time to end restrictions and let people self-isolate if they’re at risk.”

Among the six regions where most residents agree with the idea, Saskatchewan had the highest level of agreement, at 62 percent. Quebec was next at 59 percent, followed by Alberta at 57 percent and Ontario at 54 percent. British Columbia and Manitoba showed majority support at 52 percent and 51 percent respectively.

Atlantic Canada, the only region where most residents disagree with the idea, had 52 percent opposed versus 40 percent in favour.

Speaking at a virtual press conference on Jan. 21, Canada’s chief public health officer Dr. Theresa Tam said the latest modelling update from Jan. 14 suggests that Omicron infections across the country will likely peak in January and recede going into February.

“In the week since the modelling update, there are early indications that infections may have peaked at the national level, including daily case counts, test positivity, Rt or effective reproduction number, and wastewater surveillance trends,” she said.

Tam noted that while the modelling suggested Canada may have passed the Omicron peak, daily hospitalizations and intensive care admissions are still “rising steeply” and many hospitals across the country are under “intense strain.”

She called for continued vigilance.

Angus Reid noted that although public health officials stressed vigilance in the face of Omicron, “plans for vaccination proof have begun to diverge, with some provinces removing requirements and restrictions.”

Moe said that “in the not-too distant future,” he will be ending the province’s policy requiring either proof of a negative test or proof of vaccination.

Moe, who said he recently contracted COVID-19 despite being fully vaccinated with a booster shot, noted that vaccination does not reduce the spread of the virus.

The premier, however, said he believes that vaccination did keep him “from becoming sick” and that he would continue to encourage people to get vaccinated.

Angus Reid said that if Canada has indeed moved past the worst of the Omicron cases, as the modelling suggested, it has many Canadians asking what is next.

“The public sentiment appears to be moving in the direction of opening up communities,” the institute said.

Angus Reid conducted the online survey from Jan. 27 to 28 with a randomized sample of 1,688 Canadian adults who are members of the Angus Reid Forum. The survey has a margin of error of +/-2.5 percentage points, 19 times out of 20.