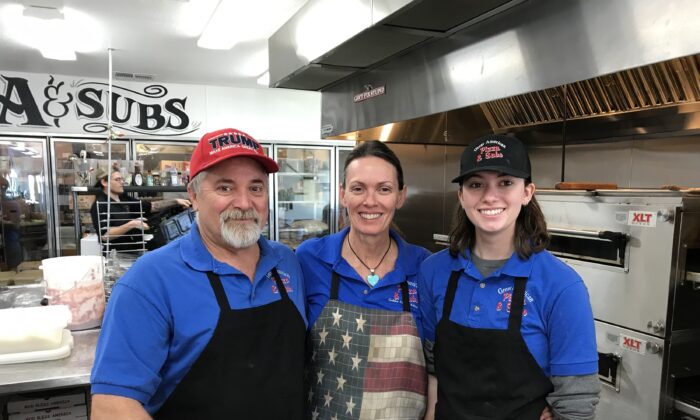 LUPTON, Arizona—A convoy numbering about 100 vehicles made its first two stops in Arizona, receiving free food from a pizza restaurant and the Navajo Nation.

The group, dubbed The People’s Convoy, is en route to Washington to protest against COVID-19 mandates and other actions drivers and supporters call government overreach.

The convoy spent their second night on the road on the Navajo reservation, keeping warm by fires and eating food provided by the nation.

“I’m here to support all of these patriots here as they go across the nation. I believe the message they’re sending is needed,” Myron Lizer, the vice president of the nation, told The Epoch Times.

“I believe in small government, I believe in everything that they stand for,” he added. “Government is overstepping its bounds. You can’t make people do anything. Our U.S. Constitution protects us, the personal religious freedom, and the personal rights of our citizens. So government needs to know when to step down.”

Truckers and people driving other vehicles traveling in the convoy made their way after to Great American Pizza and Subs, where owners cooked up over 600 pizzas and didn’t charge the convoy for the fare.

“We love freedom, number one. And they’re traveling the roads to express, ‘look, we want to be free,” Robert Hall, who owns the business with his wife, Kathleen, told NTD, part of the Epoch Media Group.

Tips were given to the restaurant that ended up equaling more than the amount the convoy would have been charged. Leftover tips were used by the Halls to buy fuel for convoy vehicles.

Convoy’s organizers said the group has grown in size since departing southern California.

Jerry, a trucker and Polish immigrant, told The Epoch Times that he’s participating because he sees chilling similarities between what’s happening in the United States and the country he fled from.

“When I was living in Poland … we were under the Russians. It was a communist country,” he said, adding that he was looking for freedom. “America means for me freedom. Now, what’s going on in this country? It reminds me of my days in Poland. We are going in the wrong direction, because I was there—I know what socialism is, communism is, and no way, we will not let it happen here in the United States.”

Josh Schlangen of Duluth, Minnesota drove hundreds of miles to meet up with the group. He plans on sticking with them until Oklahoma.

Schlangen said he was motivated to show his support because he opposes COVID-19 vaccine mandates.

“They’re [expletive]. You can’t force people to stick a needle in their arm,” he told The Epoch Times.

The convoy is scheduled to arrive in the Washington area on March 5.

A separate group, led by tow truck company owner Bob Bolus, arrived on the Capitol Beltway on Wednesday but headed home after they failed to deliver on vows to disrupt traffic.

Bolus, of Scranton, Pennsylvania, told The Epoch Times that he plans to go back once other convoys converge on the Capitol region.