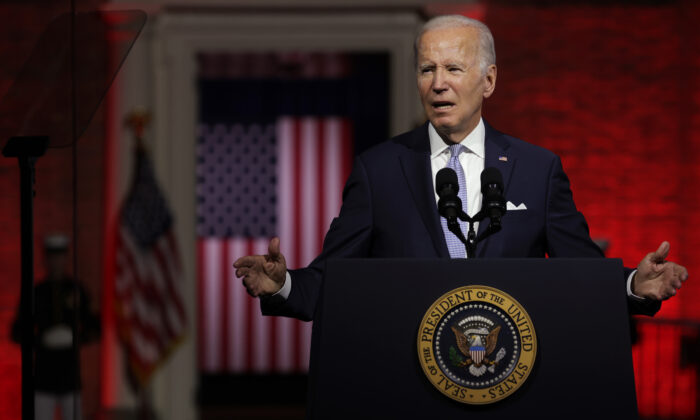 During the speech, the president attacked tens of millions of people who voted for former President Donald Trump, describing them as extremists.

“Whatever you think of this speech the military is supposed to be apolitical,” CNN host Brianna Keilar, whose husband serves in U.S. Army, wrote on Twitter. “Positioning Marines in uniform behind President Biden for a political speech flies in the face of that. It’s wrong when Democrats do it. It’s wrong when Republicans do it.”

CNN Chief National Affairs Correspondent Jeff Zeleny wrote that “there’s nothing unusual or wrong with a President delivering a political speech — it’s inherent in the job description — but doing it against a backdrop of two Marines standing at attention and the Marine Band is a break with White House traditions.”

“The Marines behind Biden was weird,” ABC News producer Jeffrey Cook wrote. “If Trump did that, every Dem operative I follow would be freaking the [expletive] out.”

“Like or loathe what he said tonight, it should be noted: The president spoke tonight on the grounds of a national park, flanked by US Marines, and took direct, specific aim at his predecessor and members of the Republican Party,” he wrote. “Another thing we don’t see everyday.”

The White House on Thursday claimed that Biden’s speech would be optimistic and not political. However, Biden called on voters to unite against “MAGA Republicans” and Trump, alleging they are a threat to democracy.

Some Republicans and other commentators also criticized Biden for standing directly in front of a dark blood-red backdrop during his speech, and cropped photos of the president were being shared.

“It depicts the president of our nation, as he took to the airwaves and spoke about his fellow citizens as if they were sewer rats,” he wrote on social media.

Some compared the image to communist or Nazi propaganda.

“Everytime I think Biden and crew can’t be dumber they outdo themselves,” Barstool Sports chief executive Dave Portnoy wrote. “Seriously who gives a speech warning people about how dangerous Republicans are to Democracy while having a background that looks like the Soviet Union and Hitler had a baby?”

“This blood red setting and negative complaining about political opponents means one thing — Joe Biden is really nervous that Donald Trump is going to run again,” wrote Richard Grenell, a former ambassador and the acting director of national intelligence in the Trump administration.