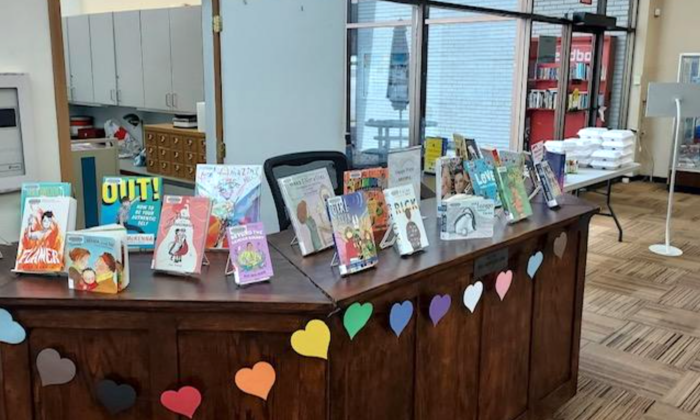 Children's books containing transgender and homosexual content on display at the library in Columbia, Tenn., in 2022. (Courtesy of Aaron Miller)
By Jackson Elliott

When a 13-year-old girl said she was actually a boy, teachers at her Maine school allegedly started using male pronouns for her and a counselor gave her a breast binder to wear to create the appearance of a flatter chest.

No one told her mother.

Amber Lavigne said she discovered the device in her daughter’s bedroom. It was then that the child disclosed that a social worker at the Great Salt Bay Community School had given it to her and that the teachers changed the name and pronouns she used at school, Lavigne told her community’s school board members during a public meeting on Dec. 14, 2022.

The youngster was told to keep it a secret from her parents, which caused her increasing “stress, anxiety, and depression,” Lavigne told the school board of the Central Lincoln County School System (CLCSS) AOS 93. The district serves seven rural communities in midcoast Maine.

“Utilizing these devices can cause serious side effects,” the Newcastle mother told board members.

Studies suggest that breast binders can cause back pain, shortness of breath, chest pain, skin problems, and rib fractures.

When Lavigne expressed concern to school officials for “this heinous act, they expressed grave concern,” she told board members.

Her daughter had turned 13 just a month before.

“She’s a minor child—my minor child!” the mother said, fighting tears throughout her three-minute opportunity to speak at the meeting. “And under no circumstances should she have been provided a chest binder without the knowledge of the parents.”

The school won’t release notes from meetings between the social worker and the child, Lavigne told board members.

“[A worker] at the school encouraged a student to keep a secret from their parents!” Lavigne said. “This is the very definition of child predatory sexual grooming. Predators work to gain a victim’s trust by driving a wedge between them and their parents.”

With a quavering voice, Lavigne demanded that all employees with “knowledge of the secret” be immediately terminated from their positions and that her child’s records be released.

“Laws, policies, and parental trust were broken,” she said, adding that a wedge had been driven between the child and her parents.

“Consider for a moment if this was your child. What would you do? No other parent should have to go through the trauma and distress that this has caused my family.”

School board members and officials at the Great Salt Bay Community School, CLCSS AOS 93, didn’t respond by press time to requests by The Epoch Times for comment.

The social worker who worked with Lavigne’s child is Sam Roy, Lavigne told The Epoch Times. Roy is a graduate student with a conditional state license to practice social work. In 2016, he served as a public relations officer for the “Wilde Stein: Queer Straight Alliance,” a University of Maine LGBT group.

Lavigne has filed a formal complaint against Roy with Maine’s Office of Professional and Occupational Regulation, according to an email from the agency confirming receipt of Lavigne’s allegations.

Roy wasn’t alone in his efforts to coach her daughter’s secret transition to living as a boy at school, Lavigne said. Other school officials also took part, she alleged, by hiding from her the child’s use of male pronouns at school.

After Lavigne’s story went public, the Great Salt Bay Community School removed its staff directory from its website, according to the Wayback Machine internet archive.

The school also posted a statement on its website, saying some individuals had spread “rumors and allegations” online to “try and divide our community.” The statement never said what issue it addressed.

The Great Salt Bay Community School Board’s statement also claimed it made decisions based on Maine law, but never specified what these decisions were.

“When administrators receive concerns from parents and/or students about potential issues in school, the Board has specific policies and procedures in place that must be followed when addressing those concerns. Those policies comply with Maine law, which protects the right of all students and staff, regardless of gender/gender identity, to have equal access to education, the supports and services available in our public schools, and the student’s right to privacy regardless of age,” the statement reads.

Maine lawmakers are now considering a state educational rule that would allow social workers and school counselors to keep secrets about children from parents.

In a November 2022 interview with The Epoch Times, parental rights activist Alvin Lui predicted that Maine could soon allow social workers to provide breast binders to students without parental consent.

What Lavigne says happened to her daughter shows how gender activists can influence children, Lui said. They may lie to parents to get children to commit to permanent body alteration. They may urge pronouns, then binders, then hormones, then surgery, he said.

“All they’re trying to do is to put you off as long as they can, so that it can move your child through the train,” Lui said.

McBreairty promoted a fundraiser for Lavigne’s case on Twitter. The GiveSendGo account has raised $1,241 of the $2,000 goal “to help Amber and her family with her initial legal retainer,” he told his audience on Twitter.

In another post, McBreairty noted that six of Maine’s most influential news outlets didn’t cover the school’s attempt to transition the child without the mother’s knowledge.

That’s how “you know the sexual grooming is real,” he said.

In a written interview with The Epoch Times, McBreairty said he expects Maine’s government to draw out Lavigne’s case to make it expensive.

“If Ms. Lavigne and her legal team decide on what legal grounds they could sue the school, I would think, in a morally sound and legitimate legal system, they would easily win,” he wrote.

The case could be a turning point for the United States, as parents realize public schools are “irreparably broken,” McBreairty said. He touts school choice as a solution.

America’s public schools now want to “separate the minor child from their parents,” he said. If students go there, they run the risk of getting indoctrinated into radical gender beliefs, he warned. He said parents must either “fight like hell” to recapture schools or remove their children before it’s too late.

What happened to Lavigne’s daughter could easily happen elsewhere in the state, he said.

Licensed clinical social worker Christopher McLaughlin was elected to a three-year term that began in July 2022 to serve on the Hermon School Committee in Maine. He has publicly said he won’t warn parents about children questioning their gender identity or sexual orientation. He added that even if a child might be in danger because of the behavior they exhibit in their new gender identity, he would never tell their parents.

McLaughlin also works as an adjunct faculty member at the University of Maine in Orono and at Husson University in Bangor, Maine.

“It is not ever my role, regardless of where I am practicing, to out that kid to their parent, even if there are safety issues present,” McLaughlin said in a Zoom meeting that McBreairty uploaded to Rumble.

McLaughlin leads the Maine chapter of the National Association of Social Workers.

“If it can happen in little Damariscotta, Maine, a town of some 2,500, where the school board is dominated by Democrats, it can happen anywhere,” McBreairty wrote to The Epoch Times. “When will you take your children’s education as seriously as their lives?”