Two other states ban TikTok to a lesser extent 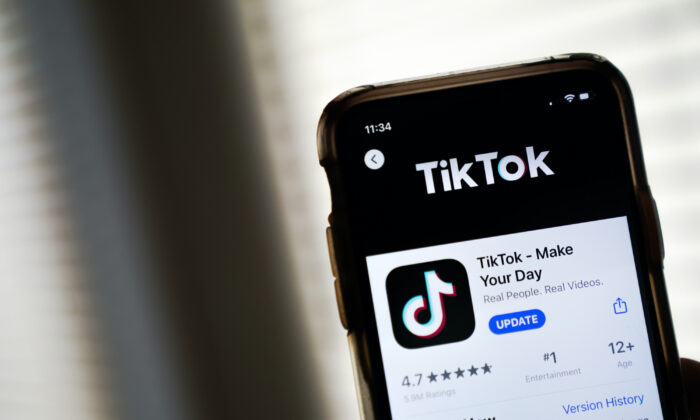 In this photo illustration, the download page for the TikTok app is displayed on an Apple iPhone in Washington on Aug. 7, 2020. (Drew Angerer/Getty Images)
By Mimi Nguyen Ly

Maine has become the latest state to ban TikTok from state-owned devices that connect to the government network.

The video-sharing app is owned and operated by ByteDance, which is a Chinese company that moved its headquarters to Singapore in 2020.

More than 28 U.S. states and the federal government have banned the popular app from state-owned devices. The U.S. armed forces have also have prohibited it on military devices.

Maine IT says the directive (pdf) is in response to “well-documented national security risks posed by TikTok” and “recently enacted federal legislation that prohibits the use of the application on all federal government devices.”

The directive requires TikTok to be removed from all state-owned and personal devices that connect to the government’s network by Feb. 1.

“If previously installed, any covered technology must be immediately uninstalled to circumvent any exposure of sensitive information,” the directive states. “Failure to meet the requirements of this directive may result in disciplinary action up to and including termination.”

The new requirement does not affect personal devices that don’t connect to the state government’s network.

The FBI and Federal Communications Commission have issued warnings of possible threats TikTok poses to U.S. national security, including that user data obtained by the app—such as browsing history and location—could be shared with the authoritarian Chinese regime.

Concerns were heightened in late 2022 amid media reports that staff of ByteDance used the company’s access to TikTok user data to improperly track American journalists.

While TikTok has previously said that all U.S. user data was stored within the United States, it has since admitted that this is not true. In a September 2022 congressional hearing, TikTok executives refused to commit to stopping the flow of American data to the Chinese Communist Party (CCP).

The States That Have Banned TikTok

TikTok rose in popularity in the United States in 2017 after ByteDance acquired Chinese-owned social media company Musical.ly and paired its Santa Monica office with TikTok.

Casey Fleming, a cybersecurity expert and CEO of strategic advisory firm BlackOps Partners, previously told The Epoch Times, “All of your data on that phone, everything you do, and everything that you have stored on your phone is being sent out of the country, possibly to be used against you.”

Besides national security concerns, many have raised concerns about TikTok’s content and its potential harms to the mental health of adolescents. In December 2022, the state of Indiana filed two lawsuits against the company, accusing it of sending user data to the CCP and also of falsely claiming that its product was safe for children.

Separately, Florida back in August 2020 banned TikTok from all devices within the facilities of the state’s Department of Financial Services.