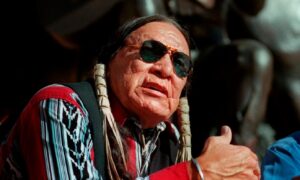 Mae Young, a legendary female wrestler, has died, the WWE confirmed. She was 90.

WWE’s Stephanie McMahon confirmed the news on her Twitter.

“A true pioneer and legend has passed tonight,” McMahon wrote on her account. “Long live the memory of my friend and WWE Hall of Famer.”

Young was in hospice care in South Carolina before she died, according to local reports.

The WWE issued an official statement about her death.

“WWE is greatly saddened by the news that WWE Hall of Famer Mae Young, beloved member of the WWE family and oldest living squared circle personality, has passed at the age of 90,” the statement reads.

It added: “Johnnie Mae Young was truly one of the greatest female competitors to ever lace up a pair of boots. A proud competitor for three quarters of a century and valued part of WWE to her last day, Young truly blazed a path for future female grapplers beginning in the 1940s.”

“From the moment she first stepped through the ropes, Young established herself as one of the most active and successful female Superstars – including becoming the first U.S. Women’s Champion, carrying out one of the most storied rivalries of the time with the legendary Mildred Burke in 1954 and being among the first female competitors to tour post-war Japan.”

The WWE said that “in recent years, Young’s career received the recognition it deserved. In 2005, she and several of her contemporaries were profiled in ‘Lipstick and Dynamite,’ a documentary film about the early pioneers of women’s wrestling. In 2008, Young joined co-star, trainee and late friend Moolah and ‘Sensational’ Sherri Martel in the highest class of Superstars, as she became only the third female  to be inducted into the WWE Hall of Fame at that time.”

For the past few weeks, she was gravely ill and on her deathbed, according to local reports.

“One of the toughest ladies on the planet. So long Mae Young. Thanks for the entertainment. #RIPMaeYoung,” one user tweeted.

Another added: “Mae Young was a force of nature. Fearless, passionate and a role model for women in a very tough business. Truly a one of a kind. #RIPMAE.”

“Oldest living Hall of Famer, wrestled in 9 decades…Mae Young was a true legend,” said another.