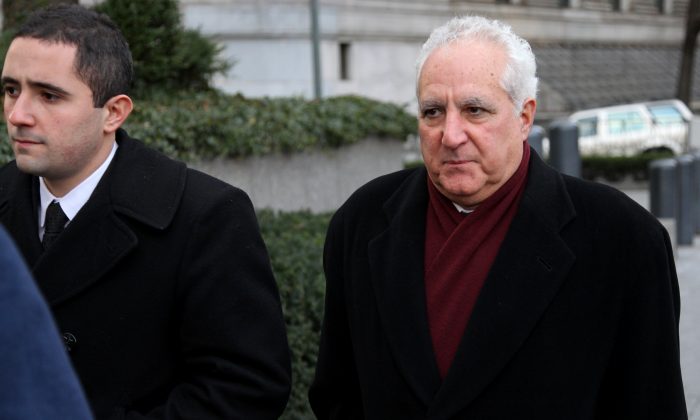 NEW YORK—Imprisoned financier Bernard Madoff’s former director of operations for investments faces sentencing Monday, the first of five Madoff ex-employees to learn their fate in coming days after a jury convicted them earlier this year of charges related to the multi-decade, multi-billion dollar fraud.

Federal sentencing guidelines for several Madoff defendants call for prison terms even longer than the 150 years Madoff received, but even prosecutors acknowledged that was not necessary while still urging “a severe sanction, proportionate to their roles in this historic fraud.”

The government seeks prison terms of more than a decade for each, saying they are most culpable besides Madoff himself for a fraud that cost thousands of investors nearly $20 billion when it was revealed with Madoff’s December 2008 arrest.

Their crimes involved ongoing and systematic deception; for years, they repeatedly lied to investors, regulators, auditors, and banks,” the government said in court papers. “The defendants—all of them—falsified literally millions of pages of documents and engaged in a series of almost comic efforts to further the fraud.

“Ordinary people and sophisticated investors alike relied on documents created by the defendants—all of them—in making important life decisions. Some people retired because they thought their money was safe. Others bought a home. All of them lost everything. Charities collapsed. University endowments shrank overnight. Pension plans … lost millions upon millions. Any one of these five defendants could have stopped it decades ago. Instead, they chose to personally profit,” it said.

Defense attorneys are requesting leniency, with some saying incarceration is unnecessary.

The government has asked that they be immediately incarcerated while defense lawyers have requested they be freed on bail pending appeal.

Prosecutors say all five deserve stiffer sentences than Madoff’s brother, Peter, who received a maximum 10-year sentence after the one-time compliance director for Madoff’s firm pleaded guilty to charges. They said Bonventre and Bongiorno were the most culpable of the five because of their “40-year involvement at the very heart of the fraud.” They said Crupi, who joined later but “took on an active and ambitious role,” was next while the computer programmers were slightly less culpable than Crupi.

Prosecutors recommend Bonventre receive significantly more than the 20 years suggested by the Probation Department, saying he had lied to the Internal Revenue Service, theSecurities and Exchange Commission, the jury and the judge.

In court papers, lawyers for Bonventre noted that their client turns 68 this month and that a sentence of any length would amount to a life term. Like defense lawyers for the others, they portrayed their client as a victim of a controlling and evil man. They recommended Bonventre receive home confinement, community service, or a short term of incarceration.

“Most of us would like to believe that when confronted with Mr. Bonventre’s situation, we would have had the fortitude, integrity, or ability to stand up to Mr. Madoff, would have seen through his manipulations, and disassociated ourselves from the only real job we had ever known. Perhaps some of us would have been successful in doing so. Others not as much,” they wrote.

“But Mr. Bonventre should not be sentenced, any more than any other defendant should be sentenced, without an attempt, however imperfect, to stand in his shoes, see what he saw, hear what he heard, and now, to experience what he has over the last six years with his world in tatters,” they said.

They added that even leniency “will not remove the millstone that Mr. Bonventre is doomed to carry around his neck to the grave.”