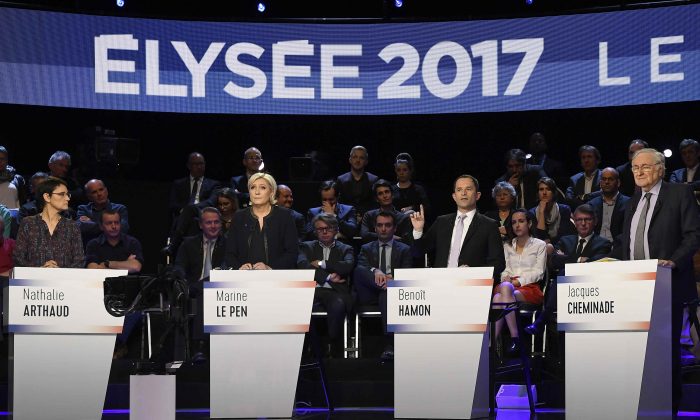 The three-hour debate involves all 11 candidates, some of whom draw one percent or less of support in polls, and a majority of which are against the EU.

Rounding on the National Front leader, who wants to leave the euro, hold a referendum on EU membership and curb immigration, Macron said: “Nationalism is war. I know it. I come from a region that is full of graveyards.”

The centrist, who voiced his strong pro-European views, comes from the Somme region, a major battlefield in World War One.

Le Pen, who also came under attack from conservative Francois Fillon, hit back: “You shouldn’t pretend to be something new when you are speaking like old fossils that are at least 50 years old.”

Macron then retorted: “Sorry to tell you this, Madame Le Pen, but you are saying the same lies that we’ve heard from your father for forty years.”

The comment appeared to be a swipe at Le Pen’s efforts to detoxify the party her father Jean-Marie Le Pen founded and make it more palatable to mainstream voters.

The two politicians, who most polls say will face each other in the May 7 runoff for the presidency, clashed too over ways of protecting French markets within the EU, with Le Pen arguing in favor of imposing a border tax on imports—a move which Macron said would cause French farm exports to be barred from foreign markets.

Le Pen replied that other countries were already introducing protectionist measures and spoke in favor of what she called “intelligent protectionism”.

“You should go talk to farmers from time to time, Mr Macron. Our vegetable and fruit producers say they can’t face the unfair competition from countries where wages are a fourth or a fifth our own.”

Many of the candidates whom polls show have no hope of going far in the election said, like Le Pen, that France ought to ditch the euro and leave the bloc. She insisted she would not do that immediately if elected, but first hold negotiations and a referendum.

With only 19 days to go before the first round of the election, the debate gives challengers like Fillon an opportunity to close the gap on Macron and Le Pen.

It also is, for outsiders like right-winger Nicolas Dupont-Aignan, who has around 4-5 percentage points in opinion polls, and for five candidates who poll between 0 and 1 percent, a rare chance to step into the spotlight.

Macron and Le Pen are tied on 25 percent in the April 23 first round of the election, although Macron would go on to beat Le Pen in the second round, a Le Monde/Cevipof opinion poll and a separate Ifop poll showed on Tuesday ahead of the debate.

The Cevipof poll, which surveyed 14,300 people between March 31 and April 2, said Macron would beat Le Pen in the May 7 runoff by 61 percent to 39 percent.

The race for the Elysee has been marked by major twists and turns that have seen the eclipse of some big names and the emergence of scandals that have troubled the campaigns of some of the main players.

Fillon, a 63-year-old conservative prime minister, was the front-runner in the campaign until he was hit by allegations that he paid his wife, a son and daughter hundreds of thousands of euros of public money for minimal work.

He now trails third in the first round, according to polls, a position which would eliminate him from the race.