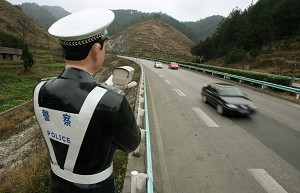 A statue of a Chinese policeman holds a fully functioning speed gun, to catch speeding motorists on the Guiyang to Kaili expressway in Guizhou Province. (Mark Ralston/AFP/Getty Images)
China

BEIJING—Speeding drivers in south China are getting clear away thanks to machines which switch the numbers on their licence plates in seconds, state media said on Tuesday.

“More than 50 percent of cars caught on camera for speeding and other offences either cover up their plates or use a fake licence plate,” a traffic policeman in the Guangdong city of Yangjiang was quoted by the Beijing Youth Daily as saying.

“Our chances of capturing them is next to nil.”

The price of the remote-control device starts at around 800 yuan ($115), while a more advanced apparatus with the ability to flip over the numbers in less than three seconds costs more than double.

“The era of covering up the licence plate by hand has passed,” a driver surnamed Zheng told the newspaper.

“It's really convenient and economical too,” a salesman who specialises in such devices in the provincial capital of Guangzhou was quoted as saying.

In April, the state news agency Xinhua, reported that China had confiscated thousands of fake military vehicles and number plates in a move to crack down on citizens masquerading as privileged members of the People's Liberation Army.

In years past, Chinese counterfeiters have used fake military vehicles to ship bootleg cigarettes and other goods, previous reports have said.