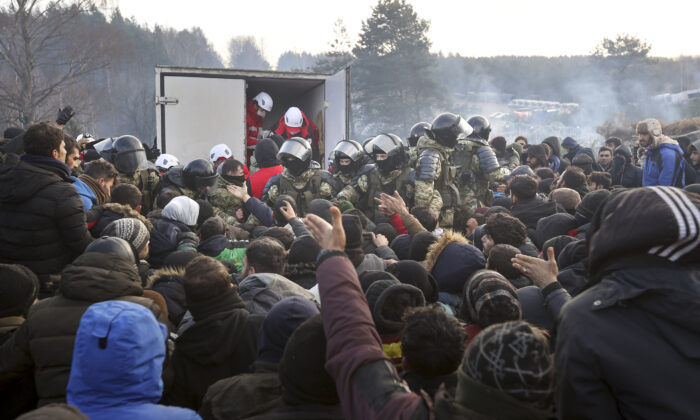 Belarusian servicemen control the situation while migrants get humanitarian aid as they gather at the Belarus-Poland border near Grodno, Belarus on Nov. 12, 2021. (Ramil Nasibulin/BelTA pool photo via AP)
Australia

Pressure is mounting on the European Union (EU) to deal with the alleged weaponization of migrants by Belarus President Alexander Lukashenko.

Lukashenko and his regime ordered thousands of migrants from the Middle East to be shipped to the EU borders in Poland, Lithuania, and Latvia, threatening the cohesion and solidarity between the EU and its northern member states.

“Lukashenko used migrants, who were encouraged to come to Belarus, as a weapon,” Wojciech Lorenz, an analyst at the Polish Institute of International Affairs, told The Epoch Times.

Lorenz says Lukashenko is motivated by three things: the de facto international recognition of his regime, sanctions relief, and taking revenge on those who support the democratic opposition in Belarus.

“Poland and the Baltic states were exceptionally active after the falsified presidential elections in Belarus last year and exerted pressure on the regime to limit the repressions against the opposition,” Lorenz said. “They also mobilize international public opinion and the EU to impose political and economic costs.”

Lorenz pointed to only partial success when asked by The Epoch Times about whether Lukashenko’s migrant ploy was yielding results.

“Most of the EU states have not recognized the legitimacy of Lukashenko as president, and no Western leader has met with him since then,” he said.

“As German Chancellor Angela Merkel decided to talk to Lukashenko, he achieved at least one of those goals, which is a de facto recognition, although … this decision is somehow limited by the fact that Merkel is an outgoing chancellor.”

EU support for Poland and the Baltic countries currently is holding, although that could change as the crisis deepens. Speaking ahead of a meeting of EU defense ministers this week, NATO Secretary-General Jens Stoltenberg said that the alliance is “deeply concerned about the way the Lukashenko regime is using vulnerable migrants as a hybrid tactic against other countries, and this is actually putting the life of migrants at risk.”

Meanwhile, Poland’s Prime Minister Mateusz Morawiecki is in talks with Lithuania and Latvia on whether to invoke Article IV of the NATO charter. That prompts formal consultations if an alliance member perceives a threat or breach of territorial integrity, which Lorenz noted carries benefits and risks.

“The question is whether to invoke Article IV to demonstrate that situation is so serious that NATO members in the region need some more substantial support,” he said. “In my opinion, such decision should be based mainly on the calculations, how the crisis can be used by both Belarus and Russia to escalate military tensions.”

The tensions are real. Last week, Russia demonstrated military support for Lukashenko’s regime, conducting joint paratrooper drills with Belarus near Poland and amassing around 90,000 troops in Yelnya near Russia’s border with Belarus.

However, there are serious concerns that the EU may not support the resolve shown by its member states, with the EU Home Affairs Commissioner Ylva Johansson last week indicating that the EU would still need to assess the situation.

“Pushbacks should never be normalized,” said Johansson said of the policy.

Referring to Poland, Lithuania, and Latvia’s strict border laws, Johansson said: “We are still in assessment, but I think that we will ask for amendments in some of the legislation.”

Moreover, this isn’t the first time the EU has found itself in a tight spot over migration issues. In 2020, Turkish President Recep Tayyip Erdogan threatened to flood Europe with ‘millions of refugees’ unless he was paid off, ultimately receiving 6 billion euros (about $6.82 billion) in EU support for hosting migrants otherwise heading to Greece. Many of those same migrants are thought to now be flooding the EU anyway after being flown to Minsk from Istanbul.

But Lorenz believes that the EU has a strong incentive for solidarity given its experience of the migrant crisis in 2015, which severely tested the bonds between the EU and individual members.

“I believe that the EU understands that during such crisis, its credibility is at stake. This is what most states expect from the EU, that it will be able to effectively deal with hybrid threats under the threshold of open warfare,” he said.

However, while the EU moves slowly to decide the fate of these migrants, the human costs of the situation are mounting.

Last weekend, a Polish soldier serving on the Belarus border was killed in an accidental shooting involving a Polish weapon. Additionally, a 19-year-old Syrian man drowned while attempting a river crossing on the Belarus–Poland border. Fears also persist that border violence will intensify as the migrants, mostly young men who are increasingly desperate to overcome the blockages as a freezing winter approaches, attempt to break down border barriers and storm into EU territory.