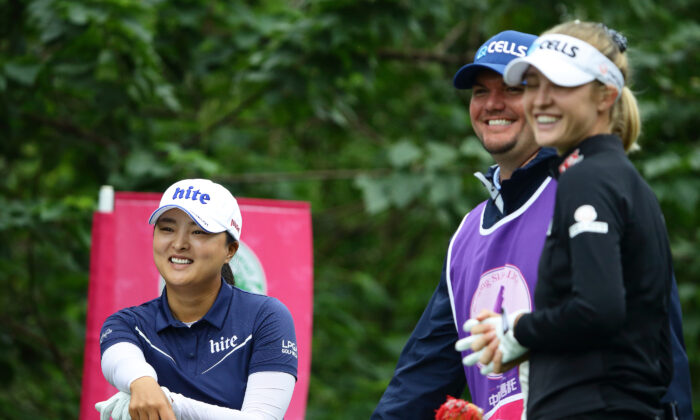 LPGA Documentary Mini-Series, and Resurgence of Kang and Ko

The LPGA is showcasing a documentary mini-series of three 15-minute episodes that began on Monday, showing on YouTube and LPGA.com, through Wednesday at 8 p.m. ET, featuring the final tournament of 2021, and the top players on the tour.

The “LPGA All Access: CME Group Tour Championship” gives an in-depth, behind-the-scenes look, into the matchup of Nelly Korda and Jin-Young Ko (South Korea) for the final tournament of 2021, and the Rolex Player of the Year Award.

“This documentary helps show the accessibility and personality of our players, along with the drama and intrigue of the CME Group Tour Championship,” LPGA senior vice president Brian Carroll said. “Hopefully this is just the beginning of our storytelling in this format.”

The series includes the Lifetime Achievement Commissioner’s Award to Judy Rankin, and the 2021 Louise Suggs Rookie of the Year award to Patty Tavatanakit.

The series shows the daily life of LPGA tour players and their comradery, and a caddie that has worked both professional tours states that the talent is equivalent to the PGA tour.

The first show included comments of last week’s champion, Lydia Ko, at the Gainbridge LPGA at Boca Rio. She is the first player to win 17 LPGA Tour titles before the age of 25 since Nancy Lopez in 1979 at 22 years of age.

The win puts Ko at 21 points, just six points shy, toward the LPGA Hall of Fame, for the 24 year old from New Zealand and gives her first back-to-back season win since 2015–2016.

Ko holds the record for the youngest#1 world ranking at 17 years, 9 months, and 9 days of age, for any PGA tour.

Regarding her three-year drought since last year’s victory at the 2021 Lotte Championship Hawaii, “I’m super excited that I was able to win,” said Ko on Golf Today. “Winning in Hawaii was a huge confidence booster, and more proof to myself (that) I can be back in the winner’s circle.”

Ko contributes her return to form to working with swing coach Sean Foley; it helped her out-duel American Danielle Kang in the final round of Gainbridge last week to finish at 14-under, with a final round 69. Kang was in contention, hoping to win consecutively, finishing second shooting 68 in the final round with a score of 13-under.

Kang had won the opening tournament of the year the week before at The Hilton Grand Vacations Tournament of Champions, after being winless in 2021.

Butch Harmon, Kang’s coach, contributes the success to off-season strength training including UFC martial arts, as well as mental coaching, and practicing in winter conditions in her home of Las Vegas.

“I’m hitting the ball so well that I just keep giving myself birdie opportunities,” said Kang on the Golf Channel.

Kang added that this is a process of improvement, not just winning last week or this week, but for a better quality of golf to compete, and to be able to contend in tournaments.

Kang stated after her victory at the Tournament of Champions that her mentality changed from letting go of the “what could and should have happened,” to staying in the moment and concentrating on the shot at hand.

The 2022 season should be very competitive with the last four tournament winners since the end of last season.

Kang and Korda have 11 Top Ten finishes in the past two seasons, while Lydia Ko and Jin Young Ko lead with 13.

This weeks’ tournament remains in Florida at the LPGA Drive On Championship in Fort Myers, with a total purse of $1.5 million, along with 500 points towards the Race to the CME Globe.