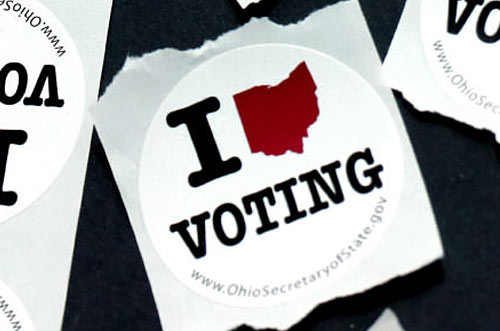 Ohio is continuing its trend of low early voter turnout going into the May 3 primary election. Officials were predicting an 80 percent early turnout, but a day before the election it was only about 20 percent. (Courtesy of Ohio Secretary of State's Office)
Politics

The number of early and absentee voters who have cast their ballots in the Ohio primary elections is lower than at the same time four years ago.

Whether in urban areas or rural districts, it is believed that the majority of voters will cast their votes on May 3.

In addition to the voting for the U.S. House and Senate, there is the race for the governorship, and elections for attorney general, auditor of state, secretary of state, treasurer, and Ohio Supreme Court are also on the ballot.

Republicans lead Democrats by 25,099 to 19,789 votes in early in-person ballots, cast mostly in smaller and rural areas that are known to be more conservative areas, according to numbers from the Ohio Secretary of State Frank LaRose’s office.

But so far, Democrats have cast more in-person early ballots in the large urban counties with major inner cities.

There had been an 80 percent early voter turnout predicted, but it is only coming in at about 20 percent.

The low turnout for the primary, so far, has raised the concerns of at least one state legislator, who believes they are not drawing voters to the polls.

“This primary really worries our caucus, especially for the amount of money that has been spent in the GOP race,” State Sen. Steve Huffman (R) told The Epoch Times.

“In August, there’s nothing that’s going to drive people to the ballot. The governor’s race should be driving more people to the primary. It’s hard to say why there hasn’t been a larger turnout.”

Huffman serves Ohio’s 5th District that covers the Dayton area in Montgomery County, and parts of Miami, Darke, and Preble counties north and northwest of Dayton.

“I’m surprised that people aren’t turning out to vote for or against the governor,” Huffman added. “Mike DeWine hasn’t been perfect, but he has done a good job. He’s pro-life, pro-gun, and supports a lot of other issues Ohio needs.”

Of the four Republican candidates for governor—DeWine, Joe Blystone, Ron Hood, and Jim Renacci—DeWine had led in four recent neutral polls from Emerson College, Fox News, and two by the Trafalgar Group.

On the Democratic ticket for governor in the primary, former Cincinnati mayor John Cranley and former Dayton mayor Nan Whaley are vying to advance to the November general election.

After those results are in, that won’t be the end of the elections for Ohio.

The election for any office that has a district—the Ohio House and Senate races likely will be held on Aug. 2 due to map redistricting issues. The U.S. Supreme Court rejected four proposed redistricted maps but ruled it will allow the third proposed map to be used if necessary.

The cost of a second election to taxpayers is expected to be between $25 million and $30 million.

Of the 75,000 registered voters in the rural region of Miami County in Troy north of Dayton, there have been about 1,500 ballots cast at the end of the week of April 29. Of those, 1,052 were in person, and 421 were mail-in, according to information from the Miami County Board of Elections.

That tally equated to about 2 percent when the county predicted a 20 percent early turnout.

In Montgomery County, where Dayton is the county seat, early voting also has been low.

There were 1,969 absentee ballots cast as of the week ending on April 29 and an additional 1,152 in-person ballots cast.