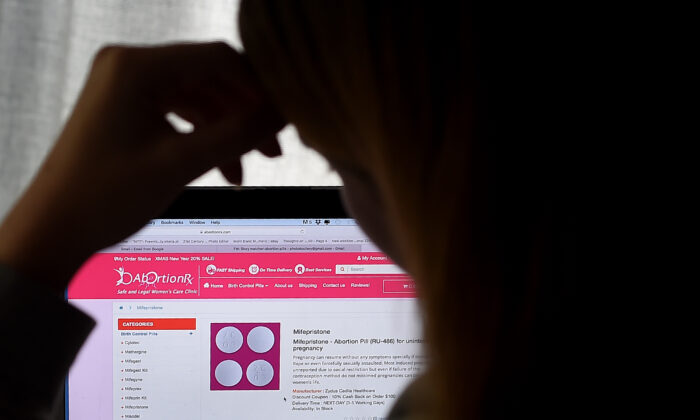 A woman looks at an abortion pill (RU-486) displayed on a computer in Arlington, Va., on May 8, 2020. (Olivier Douliery/AFP via Getty Images)
Regional & Local News

A measure to outlaw the mailing of abortion-inducing drugs has passed the Louisiana legislature, heading to Gov. John Bel Edwards for consideration.

Edwards is a Democrat who has previously signed pro-life bills into law. If signed, the bill would become law on Aug. 1.

The bill S.B. 388 (pdf) by state Sen. Sharon Hewitt underwent amendments in the House before being approved 31–1 by the state’s Senate on Friday.

The measure makes it a crime for someone to knowingly cause an abortion by “delivering, dispensing, distributing, or providing a pregnant woman with an abortion-inducing drug” if the person is not a doctor licensed under state law to administer the drug to the woman.

It doesn’t penalize the women who seek abortions.

The bill defines an abortion-inducing drug as “any drug or chemical, or any combination of drugs or chemicals, or any other substance when used with the intent to cause an abortion, including but not limited to RU-486, the Mifeprex regimen, misoprostol (Cytotec), or methotrexate.”

According to the text of the bill, If a person is found guilty they “shall be imprisoned at hard labor” from one to five years, and/or be fined from $1,000 to $50,000. Higher penalties apply if the drug causes the “death or serious bodily injury” of the pregnant woman, and even higher if the woman is under the age of 18.

Louisiana is one of the 13 states in the country with “trigger” laws that would be enacted if the U.S. Supreme Court overturns Roe v. Wade.

State lawmakers are currently considering a measure, S.B. 342 (pdf), to increase the criminal penalties for abortion providers under the “trigger” law.