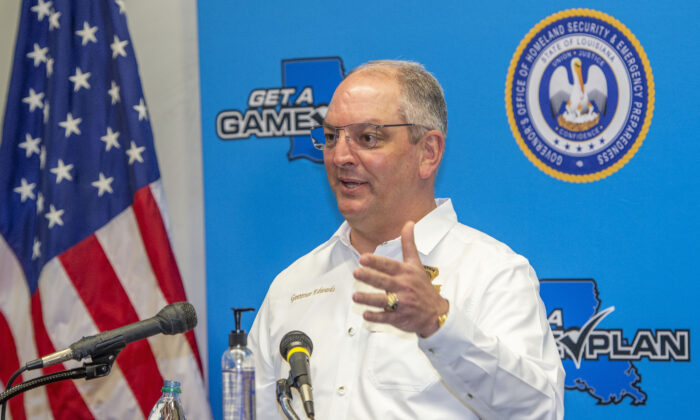 When asked by a CBS News anchor, Edwards said he felt “very good” that the system would hold up against Hurricane Ida, which made landfall in southeastern Louisiana.

Ida currently has winds of about 150 mph, according to the National Hurricane Center, and it struck near Port Fourchon, located just southwest of New Orleans, at around 12 p.m. ET.

“All of our modeling shows that we feel very good about what’s inside the hurricane risk reduction system,” Edwards, a Democrat, told CBS, noting that the storm will be a “tremendous test.” After Katrina hit in 2005, the state spent billions of dollars in reconstructing the levee system around New Orleans, which experienced significant flooding and storm surge.

“We have lesser systems, protection, built along the coast where the levees aren’t as hot and they’re not as fortified. And we’re very concerned there and this will be a tremendous test of those systems and quite frankly it’s going to be the strongest test we’ve had yet for the current hurricane and storm risk reduction system itself,” he added.

The National Hurricane Center (NHC) said the storm is moving inland, and “rapid weakening is expected during the next day or so” although “Ida is forecast to remain a hurricane through late tonight.”

“A NOAA National Ocean Service tide gauge in Shell Beach, Louisiana, recently reported a water level of 6.8 feet above mean higher high water, which is an approximation of inundation in that area,” the NHC added.

The Sewage and Water Board of New Orleans wrote Sunday that there are a number of sewage pump stations on both the East and West Banks of New Orleans that suffered power outages.

“This increases the potential for sewer backups in homes. We urge those residents who still have power to minimize wastewater leaving their homes by not running your dishwasher or washing clothes,” the board said in a tweet Sunday.

According to poweroutage.us, about 104,000 customers are currently without power due to Ida. Power outages are likely to increase as the storm moves inland.